100 years and counting with Archie Barker 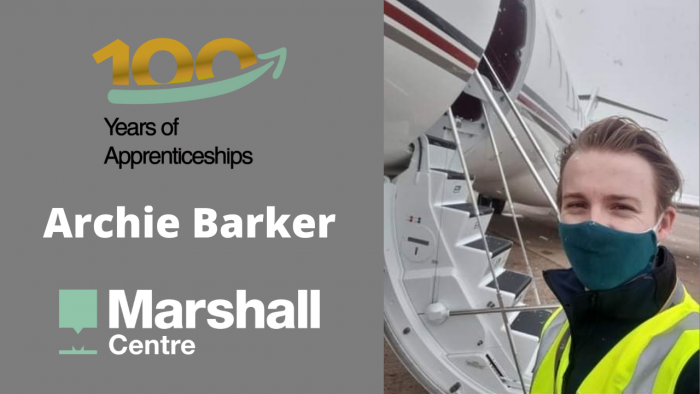 100 years and counting with Archie Barker. Archie always wanted to work on aircraft and applied quite quickly for Marshall’s apprenticeship programme. He moved on from Marshall and now works at Bombardier.

Archie always wanted to work on aircraft and applied quite quickly for Marshall’s apprenticeship programme. After two attempts, he was successful and started as an Engineering Apprentice where he spent nine months in the training centre and a year in Manufacturing Support making C130 (Hercules) parts. His last rotation was building Boeing P8 fuel tanks in aerostructures, which he enjoyed.

“Marshall really helped me start my career in aviation. I’ve been trained by the best, received so many life lessons and made some amazing friends along the way.”

Archie really looked up to Keirron Mascall and Robin Lipscombe because they did not just teach the apprentices hand skills, they also imparted their wisdom and taught them valuable life lessons. Keirron once said something to Archie that has remained with him to this day. He said that some people complete their apprenticeship and stay within Marshall for the rest of their life, others ‘hop the fence’ and see what the world has to offer. Archie has never forgotten those words and it was something that prompted him to see where his career could take him.

When Archie completed his apprenticeship, he decided to leave Marshall to join Virgin Atlantic to train to become a fully licensed Aircraft Engineer. He was picked out of 600 people and believes that it was his Marshall apprenticeship that made him stand out of the crowd. He passed all his modules in his first year but unfortunately his role was made redundant in November 2020 due to the pandemic. However, he was delighted to join Bombardier in January 2021 as a EASA CAT B1/2 Certifying Engineer Apprentice and is loving every moment!

“The apprenticeship scheme has really tailored my personal development, helped me decide the aspects of engineering that I enjoy most and what I want to pursue. I’m really glad that I’m part of the 100-year legacy and hopefully my experiences can inspire those interested in aviation to pursue their career goals in future.”

If you want to be part of the Marshall Centre legacy, look at our apprenticeship opportunities here.