100 years and counting with Jonathan Perring 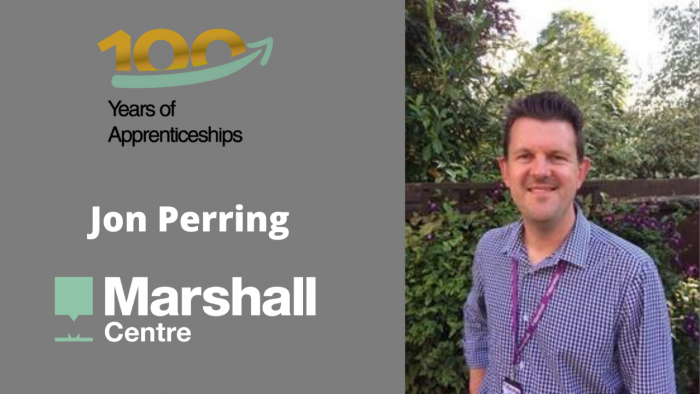 It’s a special day for Quality and Compliance Manager, Jonathan Perring as today marks his 31st year at Marshall, making him the 2nd longest serving employee at Marshall Centre.

Jon first started his journey at Marshall on the 20 August 1990 as an Aircraft Electrical Avionic Apprentice.

Jon always knew he wanted to pursue a career in engineering, so when he discovered Marshall, he was excited to join the niche industry of aircraft engineering. His four-year apprenticeship qualification allowed him to gain experience in the training centre, electrical workshop and he completed apprenticeship rotations on a variety of aircraft like C130, Boeing E3D Sentry, Gulfstreams, Cessna Citation, Bae146 and Tristars.

He completed his apprenticeship in 1994 as an Aircraft Electrician, where he worked on a BAE 146 for three years. In 1999, he was promoted to Certifying Technician to supervise Aircraft Modification and Maintenance teams. As Jon progressed in his career, he felt that he wanted a change but to a role he could implement his technical aircraft knowledge, so he secured a role in the quality department as a Quality Engineer in 2005. By 2007 he was promoted to Senior Quality Assurance Engineer, working on the civilian side of the business on Light aircraft, Business jets, Airbus and Boeing. This opportunity increased the type of aircraft he worked on.

After 27 years of working on aircraft Jon wanted to help others evolve in their career so he completed his level 3 NVQ in teaching and became a Regulatory Instructor. He said, “I’ve been through the same process as the apprentices starting today so, as an Instructor, I can relate, give back to the scheme by teaching the next generation of Engineers and make improvements to make their apprenticeship scheme better. It was really surreal when I started teaching as I am now teaching alongside my instructor who taught me 27 years ago, Robin Lipscombe!”

Jon’s current role enables him to put all the knowledge of aircraft maintenance, quality assurance and training he has gained at Marshall over the years to good use.

If you’re thinking of applying for an apprenticeship, Jon advised, “Every day there is something to learn, from when you start as an apprentice through to when you retire. There are so many great opportunities, so get involved and never stop learning!”

A huge thanks to Jon for sharing his experiences as a Marshall apprentice and happy work anniversary!