100 years and counting with Matt Siggens 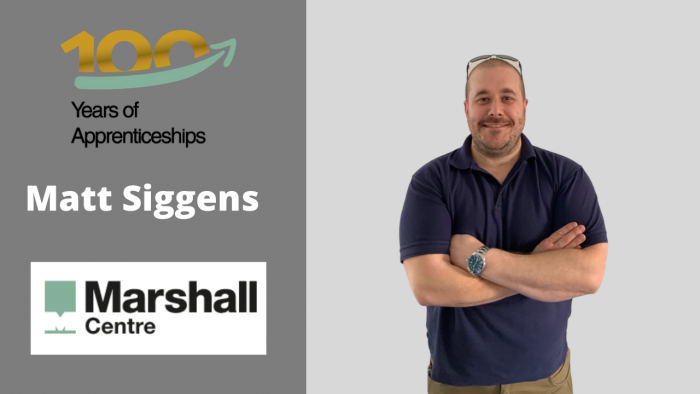 Marshall Centre’s Key Account Manager, Matthew Siggens, talks about his time on the apprenticeship scheme and his contribution to 100 years of success.

Training future talent through apprenticeships is a huge part of Marshall Centre History, with more than 100 years experience and expertise, we have a lot of unique apprentice stories to share. We caught up with Marshall Centre’s Key Account Manager, Matthew Siggens, who started at Marshall Aerospace and Defence Group fresh out of school as an Electrical/Avionics Apprentice.

Matt always enjoyed STEM subjects at school, he was either sitting with his Grandad practicing GCSE math calculator papers (without the calculator) or applying himself in design technology. His Dad was a Bio Chemist, so Matt and his sister had a lot of unique hobbies like extracting DNA from onions or bird watching. He was exposed to a lot of science and math, which fuelled his passion to work on aircraft.

He said: “I was lucky to have the opportunities from my childhood that I could transfer into a STEM career. My Grandfather developed a lot of the apprenticeship standards so a lot of my role models inspired my pathways and interest in learning while earning”.

University never really peaked his interest, so he applied for an apprenticeship in September 2005 and was successful. The trainers recognised potential in him, so always pushed him to reach a merit standard rather than a pass.

He recalled: “I remember when I was 18 months into my apprenticeship a trainer asked me if I could use the rivet gun on an aircraft. I started riveting but I wasn’t confident enough to complete the job, so the trainer did it for me and then later brought a metal sheet and practiced riveting with me so I could perfect it”.

Everyday was a school day for Matt. One day, he was at the running bay, where they test aircraft engines, and he remembered that they had to wait around while the testing was completed on a hot, sunny day. When he came inside his face was so sunburnt – he never forgot his sun cream on hot days again!

Matt also had the opportunity to work on citations, which is a brand of business jets. He described this as “another world” and recalled one of the regular customers had a creche in their aircraft!

After 10 years on the shop floor as an Electrical/Avionic fitter, he decided he wanted a challenge and was interested to learn about the business aspect of aviation. So, he did a couple of courses and applied for a Project Manager role. He wasn’t successful in the application but the feedback was positive but he just needed more experience.  To tackle this, he went on a level 1 Manager course, shadowed Project Managers and then when another role came up – he got it!

He was a Project Manager for four years, working on various aviation projects across Marshall. In 2019, Matt moved into Marshall Centre as a Key Account Manager, delivering Project Management courses.

He said: “I wanted a new challenge and an opportunity to use my expertise to tailor clients personal development. It’s something I’m passionate about as I’ve been down the training route myself so I know how it feels and anyone can be a Project Manager in their day-to-day lives.”

A huge thanks to Matt for sharing his journey with us. You can take a more detailed look in the Project Management course, which Matt delivers here.