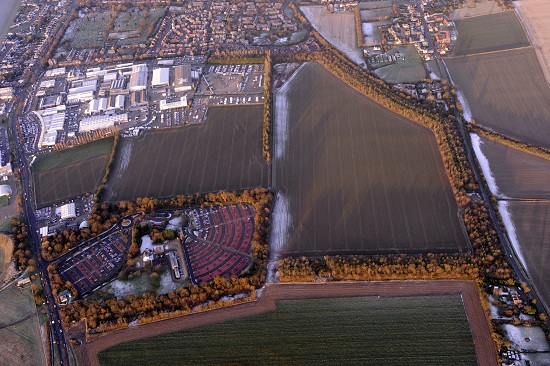 Marshall of Cambridge is developing 125 acres of land to the north of the Newmarket Road for commercial and residential use. Following an internal company competition, Marshall has announced that the new development, which could include up to 1,500 homes, a school, a commercial hub, a new petrol filling station, playing fields and open space amenity land, will have a distinctly aviation flavour by being called ‘Wing’.

Robert Marshall, Chief Executive Officer, said: ‘We were delighted to receive almost 400 suggestions for a name from our employees, which were subsequently considered by a selection panel.  The name ‘Wing’, with its link to aviation, as well as being the maiden name of the wife of the Founder of Marshall of Cambridge, seemed highly appropriate.’

Robert Marshall added: ‘Subsequently we sought opinions from all of our local Parish, City, District and County Councillors and we were pleased to receive strong support from them for this very appropriate name  We now look forward to starting public consultations about this major development!’

Marshall of Cambridge was founded in Cambridge on 1 October 1909 by David Gregory Marshall.  He married Maud Edmunds Wing at Sir Andrew’s Church, Old Chesterton, on 23 September 1902.  Maude Wing was born in 1879, and in his book The Marshall Story, Sir Arthur Marshall, the son of the founder, described his mother: ‘My mother was an exceptional woman – tall and good looking – full of unflagging energy and a perfectionist.   There is no doubt that the Marshall Family owe much to her for our upbringing, general health and capacity for long and sustained work.’

As part of the process for a planning application for the development of this land, the Company will be hosting a three day design workshop from 14 to 16 January and members of the public are being invited to attend an evening event on Wednesday 16 January from 5.30pm until 8.30pm.

Studies were undertaken between 1999 and 2011 to determine whether it was practical for Marshall of Cambridge to relocate its aviation businesses elsewhere to enable housing development to take place on the Cambridge Airport site.  These studies which were completed in 2010 clearly showed it was neither practical nor desirable for such a move to take place and in January 2011 the Company announced that it would not be relocating its aviation business.  This remains the case today.  As a result of this decision to remain in Cambridge, the Airport is now being developed in line with Government policies and has an important part to play to help secure an increase in employment in the local area.  This includes supporting existing and new businesses in the region and, in particular, those with global links.