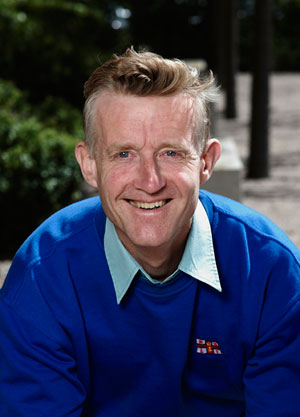 Simon Peyton Jones’ contributions to computer science continue to be recognised, and now, so is his advocacy for computing education.

On June 10, during the 35th annual conference on Programming Language Design and Implementation, hosted by SIGPLAN, the Association for Computing Machinery’s (ACM’s) Special Interest Group on Programming Languages, Peyton Jones, a Microsoft researcher, received the SIGPLAN Distinguished Service Award in recognition of the many outstanding ways he has provided service to the community.

But SIGPLAN is not the only group that appreciates Peyton Jones’ achievements. He’s become well known for his efforts to promote computer-science education. Computing at School (CAS), a grassroots nonprofit Peyton Jones helped found in 2008, is behind a major development in U.K. education: Beginning in September, state-funded primary and secondary schools in the United Kingdom will teach computer science to all children.

“Back in 2008, we didn’t think our chances of success were very good,” Peyton Jones admits, “but sometimes, people do things because they feel it must be done.”

Put the Fun Back into Computing at Schools

Peyton Jones always maintains that his job is the most fun and interesting in the world.

He joined Microsoft Research in 1998, where his main research interest has been in languages for functional programming—a type of programming that models computations as the evaluation of expressions—and their implementation and application. In 2004, Peyton Jones was recognized as an ACM Fellow, and in 2011, he received membership in the Academia Europaea. He received an honorary doctorate from the University of Glasgow in 2013.

Peyton Jones is well-known to computer scientists as a major contributor to the design of the Haskell programming language and for his work focused on the Glasgow Haskell Compiler (GHC) and its ramifications. GHC won the 2011 SIGPLAN Programming Languages Software Award, an honor Peyton Jones shared with co-researcher Simon Marlow.

When Peyton Jones’ own children were at school, he was dismayed that the standard information-and-communication-technology (ICT) curriculum didn’t teach the fun and interesting aspects of computer science that made the discipline so fascinating for him. Instead, ICT just showed kids how to use applications. This prompted him to look into the status of computing education.

A steady decline in numbers at the A-levels—equivalent to Grade 12 in North America—told the story. Around 25 percent fewer students entered A-level classes for ICT in 2007 than in 2004, with an even sharper decline in entries to A-level computer studies: The Royal Society has reported a 31 percent drop for boys and a 45 percent plummet for girls.

In response, Peyton Jones and a few friends started CAS. The group began as a grassroots organization whose goal was to put excitement back into computing at schools. Underpinning this was a concern that if the trend continued, the U.K. would fall behind in computer-science achievements.

“Initially, we grew by word of mouth,” Peyton Jones recalls. “We held meetings two or three times a year at Microsoft Research in Cambridge. It was three years before we had even 100 members. I used to maintain the membership list on a spreadsheet. Now, we have 11,000 members and the support of 35 national partners, including Microsoft, Google, and the British Computer Society. I’ve stopped using spreadsheets.”