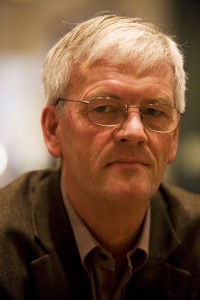 The Humanitarian Centre would like to invite you to their 2013 Annual Lecture, at 6:30 pm on Thursday 2 May, at Emmanuel College Cambridge.

He will be speaking on the topic of: "How the Global Fund revolutionised the fight against AIDS, TB and Malaria: What worked, what didn’t, and what next?"

The lecture will be followed by a networking reception. This is an excellent opportunity to find out more about the Humanitarian Centre’s member organisations and mingle with others with an interest in reducing global poverty and inequality.

It is expected that the event will be fully subscribed, so please register by 28 April in order to secure your place: http://annuallecture2013.eventbrite.com.

Attendance at both the lecture and reception is free.

About the speaker
Bernard Rivers is a UK-born economist who founded Aidspan (www.aidspan.org) in 2002, ran it until 2012, and now serves as Aidspan’s first Senior Fellow. During 2013 he also serves as a visiting fellow at Cambridge University, with affiliations to Queens’ College, the Institute of Public Health, and the Centre of Development Studies. His main project at Cambridge is a comparative analysis of the governance methods of the Global Fund and other multilateral grant-making institutions. He is also a Consulting Research Fellow at the Royal Institute of International Affairs (Chatham House).

Aidspan is an international non-governmental organisation (NGO) based in Kenya that serves as an independent watchdog of the Global Fund to Fight AIDS, TB and Malaria. Aidspan is best known for its newsletter Global Fund Observer, which has 10,000 subscribers.

Prior to founding Aidspan, Bernard founded, ran and eventually sold the New York-based company Riverside Software, Inc., which developed software to help foundations administer proposals received from and grants awarded to NGOs. The software was used by over 650 US and UK foundations.

In addition, Bernard has been a senior executive of Blackbaud, the leading developer of fundraising software for NGOs, and of AppNet, the then leading developer of web sites for large NGOs; he has been a consultant to several UN agencies and NGOs; he is an experienced public speaker and writer; he and two colleagues were named Journalist of the Year in the British Press Awards for an exposé of illegal activities in Africa by Western oil companies; and he has served on several boards. He has a BA/MA in mathematics and economics from Cambridge University.

See here for some commentaries that Bernard has written about the Global Fund.

We are grateful for the generous support of Emmanuel College in hosting the lecture and reception, and to Dr Richard Barnes, the acting master, for chairing the event.﻿