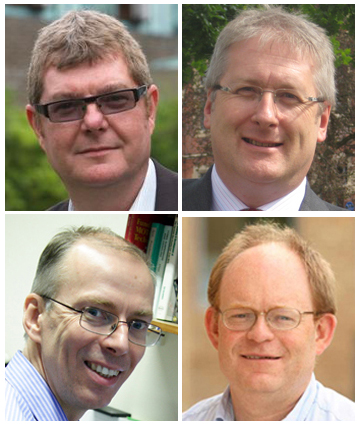 Congratulations to David Cardwell, John Clarkson, Richard Penty and Malcolm Smith, all professors at the Department of Engineering, who have been elected as Fellows of the Royal Academy of Engineering.

"We welcome our new Fellows: the collective expertise and vision of the best engineers is what drives our ambitious agenda and makes so many good things possible."
Sir John Parker GBE FREng, President of the Royal Academy of Engineering

The Cambridge professors were among 59 new Fellows elected by the Royal Academy of Engineering at their AGM this week.

The RAE commended them as follows:

Professor David Cardwell, Professor of Superconducting Engineering and Deputy Head of Department: "David Cardwell has led the European effort in the development of bulk high temperature superconductors for high field engineering applications since 1998. His extensive research, which includes the publication of over 270 technical papers and patents, has produced the first generation of more powerful superconductors; unique, high quality single grain superconductors that exhibit record energy densities that can be manufactured by a novel practical process and are now being exploited commercially."

Professor P John Clarkson, Professor of Engineering Design and Director, Cambridge Engineering Design Centre: "John Clarkson is distinguished for his work in healthcare and inclusive design as well as on design process management and change management. A celebrated leader in the field, his books and papers, in addition to the centre that he directs, has major international impact. In a break from his academic career, he was Manager of the Advanced Process Group at PA Consulting Group, where he gained much practical experience of product development with a particular focus on medical equipment and high-integrity systems."

Professor Richard V Penty, Professor of Photonics: "Richard Penty’s innovative work has led directly to products using photonics technology that have contributed to billion dollar markets. His first venture into the world of optical communications was via a student sponsorship with the National Coal Board where he designed a 1Mb/s optical line card. His current research interests include optical data communications, MMF systems (digital and analogue), high-speed optical communications systems, optical amplifiers, optical switching and routing, RF over fibre and short pulse, high power semiconductor lasers. He is a founder of Zinwave and PervasID."

Professor Malcolm C Smith, Professor and Head of Control Group: "Malcolm Smith has made key contributions to control theory, particularly robust stability, and in vehicle dynamics on the design of automotive suspensions. His current research includes passivity based control, circuit synthesis, mechanical networks, mathematical systems theory and automotive applications. Having studied initially at the University of Cambridge, he returned in 1990 as a Lecturer in the Department of Engineering, after experience as a Research Fellow at the German Aerospace Center, DLR, Oberpfaffenhofen, Germany; in the Department of Electrical Engineering at McGill University, Montreal; and as an Assistant Professor in the Department of Electrical Engineering at the Ohio State University."

The Fellows, recognised to be amongst the UK's most accomplished engineers from industry, business and academia, were welcomed by Sir John Parker GBE FREng, President of the Royal Academy of Engineering. He said: "We welcome our new Fellows: the collective expertise and vision of the best engineers is what drives our ambitious agenda and makes so many good things possible. We are making progress in our aim to encourage a broader-based Fellowship that is more representative of the society we serve. But we cannot afford to be complacent and are continually reviewing our membership strategy to see how we might strengthen it."

Founded in 1976, The Royal Academy of Engineering promotes the engineering and technological welfare of the country. The Fellowship - comprising the UK's most eminent engineers - provides the leadership and expertise for their activities, which focus on the relationships between engineering, technology, and the quality of life.

More information on this year's new Fellows can be found at http://www.raeng.org.uk/about/fellowship/newfellows.htm ﻿

The Department of Engineering is the largest department in the University of Cambridge, representing approximately 10% of the University's activities by the majority of common metrics, and is one of Europe's largest integrated engineering departments.