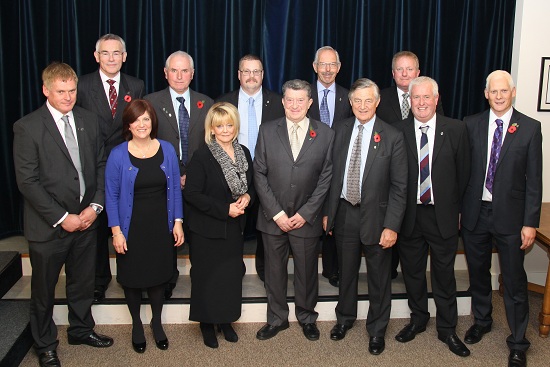 The photograph shows Sir Michael Marshall with the award recipients. In addition to Len Sapsford , of great interest were twin brothers Paul and Mark Bye of Marshall Aerospace, who had each completed 40 years of service.

Sir Michael Marshall said: ‘We are enormously proud of our many employees who provide long and distinguished service to the Group of Companies and it was a particular pleasure to reflect that many of them had started their working lives with Marshall as apprentices.  It was appropriate that we had presented our Annual Apprentice Awards the day before, at which it was mentioned that we hoped that many of our new intake of apprentices would be staying with the Company to complete long and distinguished service!’

Founded in 1909 with little capital as a chauffeur drive company in Cambridge, Marshall moved into the retail motor business in 1910, obtained the Austin Distributorship for Cambridgeshire in 1920 and entered the aviation business in 1929.  With all its growth funded by ploughed-back profits, the Marshall Group remains a privately owned family Company, with a turnover of over £1bn per annum.  The Group of Companies is chaired by the third generation of the Marshall family, and employs members of the fourth generation.  The Group currently employs just over 4,000 people working in the fields of aerospace engineering; design and manufacture of specialist vehicle applications, military mobility shelters and hospital surgical units; motor vehicle sales and after sales support; refrigerated transport sales and support; and property ownership and management.   (www.marshallgroup.co.uk).