Historic plane returns to the UK after 66 years 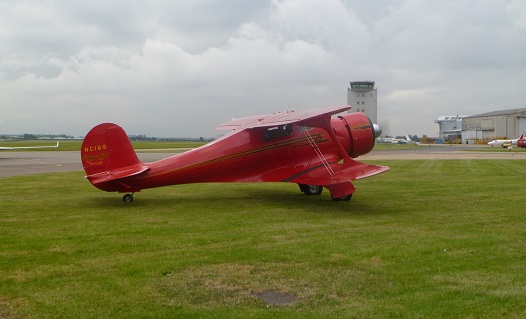 Cambridge Airport last week welcomed a historic American bi-plane to its airfield as part of its four year ‘round the world’ trip to raise money for the Wings of Hope, a charitable foundation set up to provide education for children from developing nations.

The 1943 Beech Staggerwing landed at Cambridge last Friday (21 September) and was being flown by William Charney aka Captain Biff Windsock, an American aviator and Vietnam veteran, who restored the aircraft over a period of five years with a team of experts in New Zealand.

Although originally built for the US Navy, the Staggerwing’s arrival in Cambridge was actually a homecoming since she was shipped to the UK and assigned to the Royal Navy for the end of the Second World War, before returning to America after the war. The aircraft arrived in the UK in June 1944, served at Boscombe Down and RNAS Abbotsinch (today’s Glasgow Airport) and returned to the USA in 1946.

Archie Garden, director of Cambridge Airport, commented, “It was a great pleasure to welcome such a stunning plane to our airport last week and to meet her charming, determined owner. Captain Biff has undertaken a huge challenge in flying this historic aircraft around the world, raising money for charity. We are looking forward to seeing Captain Bill and his aircraft again next year, when he plans to return to update us on his adventures.”

To track Captain Biff’s journey or find out more about his charity, visit www.captainbiff.com

Cambridge Airport is part of the Marshall Group of Companies, a private family business, owned and managed by the Marshall family. The business was founded in Cambridge in 1909, and entered aviation in 1929. Marshall Group activities which take place at the airport include Marshall Aerospace (engineering and technology), Marshall Executive Aviation (Jet Charter and management) and Cambridge Aeroclub (GA Training and Maintenance). Cambridge Airport primarily targets the east of England market with a strong focus on Cambridge and its business, academic and industrial sectors. It is also a strong provider to the equine community as it is just 10 miles from Newmarket and offers regular services for the transportation of horses.

The airport is ideally positioned for easy access to London with just under an hour’s drive to Canary Wharf and East of London the location of the key Olympics venues. With a 1965m/6447ft runway accepting aircraft up to Boeing 757 or Airbus 320 and all regional jet types, it is suitable for short to medium haul passenger airline services.  It boasts CAA Category 7 Fire & Air Traffic Control status and has full navigational aids and communications, which include radar approach coverage up to 30nm and a new GPS approach to complement its ILS system. Cambridge Airport is home to a variety of aviation service providers including charter operator Marshall Executive Aviation, MEA which operates a Cessna Citation Bravo and Citation XLS as well as a Bombardier Challenger 300. Twitter: @CBGairport