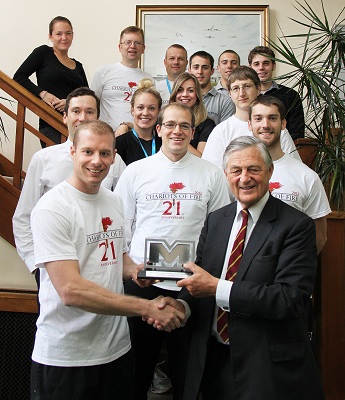 Six teams from Marshall of Cambridge took part in the recent Chariots of Fire Race in Cambridge with each team competing for the Marshall Trophy, awarded to the fastest Company Team to complete the race.

This year the winning team was named ‘The St Andrews Golf Caddies’, which led by Duncan Fraser, an MA Stress Engineer, was from the Marshall Aerospace Design Office.  They completed the course in one hour, five minutes and twenty eight seconds, coming 22nd overall in the Race.  The team narrowly beat the traditional winners of the Race, the Marshall AeroAcademy Apprentice Team, who completed the Race in a slightly slower time of one hour, nine minutes and four seconds, coming 47th overall.  The six Marshall teams included a ladies team, a team from the Airport and a team from Marshall Hyundai.

The photograph shows Sir Michael Marshall with some of the Marshall runners. He is seen presenting the Marshall Trophy to Duncan Fraser.

Sir Michael Marshall said, ‘I am delighted that so many employees and Marshall teams take part in this race each year, which remembers in a away my father’s participation in the 1924 British Olympics Team in Paris, which was immortalised by Lord Puttnam in his film Chariots of Fire.

This year marked the 21st Anniversary of the Chariots of Fire Race, of which Sir Arthur Marshall, Sir Michael Marshall’s father, was President until his death in 2007.  Since then Sir Michael Marshall has been President of the Race and was present to award the prizes on Sunday 16 September.

The Marshall Group of Companies