TOWIE star takes to the skies over Cambridge 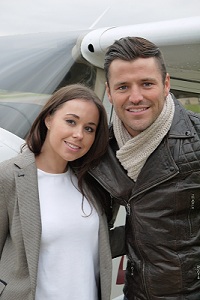 Mark Wright, star of ITV’s The Only Way is Essex and I’m a Celebrity, took to the skies in Cambridge last week after winning a flying lesson at a charity auction. Accompanying him in the plane was Gemma Manchett from Burwell, who won her place on the flight after Mark auctioned off the passenger seat.

Following a thorough air safety briefing from Cambridge Aero Club’s chief flying instructor Luke Hall, who accompanied them on the flight, the couple took off from Cambridge Airport on Friday 9 November in a Cessna 172 Skyhawk S. Once airborne, Mark took control of the aircraft under the watchful eye of Luke.

During the 40 minute flight, Mark and Gemma were able to view the city of Cambridge from the air and even flew over Gemma’s house in Burwell. Despite being nervous about his first flying lesson beforehand, Mark was hooked by the time he landed and keen to take to the skies again.

Luke Hall, head of general aviation at Cambridge Airport, commented, “We were delighted to host Mark and Gemma at the airport and give them a taster lesson. They seemed to love their time in the air and we hope to welcome them back soon. Clearly, the only way is Cambridge.”

The flight was donated by Cambridge Airport to the White Tie and Diamonds Ball, which was organised by Highfield Event Group and held on 20 October 2012 at Granary Estates Polo Club in Newmarket. The event raised over £10,000 for the Beauty With A Purpose charity, which supports disadvantaged children across the UK.

Cambridge Airport is part of the Marshall Group of Companies, a private family business, owned and managed by the Marshall family. The business was founded in Cambridge in 1909, and entered aviation in 1929. Marshall Group activities which take place at the airport include Marshall Aerospace (engineering and technology), Marshall Executive Aviation (Jet Charter and management) and Cambridge Aeroclub (GA Training and Maintenance). Cambridge Airport primarily targets the east of England market with a strong focus on Cambridge and its business, academic and industrial sectors. It is also a strong provider to the equine community as it is just 10 miles from Newmarket and offers regular services for the transportation of horses. Offering new regular airline and tour operator services to destinations across Europe including France, the Channel Islands and Italy, the airport is ideally positioned for easy access to London. With a 1965m/6447ft runway accepting aircraft up to Boeing 757 or Airbus 320 and all regional jet types, it is suitable for short to medium haul passenger airline services.  It boasts CAA Category 7 Fire & Air Traffic Control status and has full navigational aids and communications, which include radar approach coverage up to 30nm and a new GPS approach to complement its ILS system. Cambridge Airport is home to a variety of aviation service providers including charter operator Marshall Executive Aviation, MEA which operates a Cessna Citation Bravo and Citation XLS as well as a Bombardier Challenger 300. www.cambridgeairport.com