Secret life of the cat - beyond and inside the cat flap 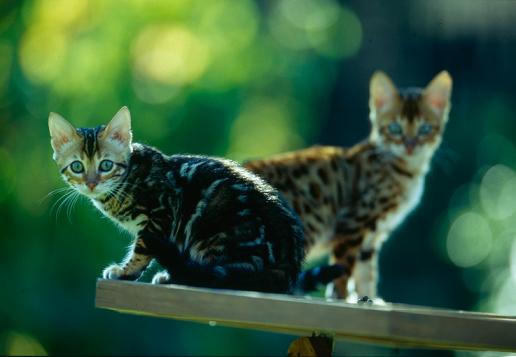 Holdsworth Associates is working together with SureFlap, the microchip-operated pet door company, in their ‘Neighbourhood Cat Campaign’, a project aiming to tackle feline turf-wars. SureFlap is investigating the Secret Life of the Cat to find out more about these fascinating creatures.

Beyond the flap your cat might have a secret life but many owners are also unaware of what is happening inside their homes. In a recent survey more than 40% of cat owners said their homes are entered by neighbourhood cats trying to gain attention, shelter, food or to attack the resident cat.﻿

Jon Bowen, animal behaviour consultant at the Royal Veterinary College says, “In our research, 51.1% of households with an unsecured cat flap experienced some kind of feline home invasion.

For the resident cat this will be extremely stressful – a common trigger for behavioural problems and health issues such as cystitis and dermatological conditions.”

“Don’t forget that this is only what the owners have seen. When cat owners are away from the home during the day or in bed at night they are unaware of what is happening.”

The stress this invasion can cause for such territorial animals is underestimated by owners, says Jon Bowen, and as a result many opportunities to improve cats’ wellbeing are being missed.

The results from the Neighbourhood Cat Campaign – which has surveyed over 1,000 cat owners and non-cat owners – has provided some fascinating insights into the secret lives of cats. 41.8% of those surveyed said their cat had been attacked in the garden by other cats and 36.6% said their pet had been chased back into the house. But even in their-own homes cats with unsecured cat flaps were still under threat, with 39.4% of these owners reporting that intruder cats stole food.

The research – led by Jon Bowen and supported by SureFlap, the microchip-operated pet door company – was prompted by concerns that dense urban cat populations were creating stress for cats. The findings will be used to help inform vets on feline behaviour in the neighbourhood, so they are better equipped to suggest remedies.

Jon explains that a cat’s territory is divided into sections, with the core home area being somewhere the cat should feel safe to eat, groom and sleep. “Outside, cats use scent marks, like scratching and urine spraying, to let other cats know when and where they will be in their territory at different times of day. This prevents cats from coming face-to-face with each other too often, so they don’t get into fights. Cats can coexist like this outdoors, but if a cat finds that its home has been invaded by another cat, it can be highly stressful.”

The research showed that cats that had received even minor injuries from fights with other cats were more likely to have health and behavioural issues. These cats had significantly higher incidences of hair loss, lameness, eye infections, coughs and sneezes and were four times more likely to spray in the house.

"The primary motivation for neighbourhood cats to invade a home seems to be to find food. There is a strong association between cats entering homes to find food and then fighting with the resident cats. It seems that many owners do not recognise that giving other people’s cats’ unrestricted access to their homes is creating stress for their pets.

“When owners are aware of the link between intrusion and stress-related problems there are many measures they can take. The most obvious is installing a secure cat flap so that only the resident pet can access the house.  I would also suggest not allowing food to be placed near the cat flap. Cats have a strong sense of smell and often can even see the food bowl through the cat flap.”

Causes of friction between neighbours were also investigated in this research.

“A common annoyance for non-cat owners was cats toileting in their garden. 69.4% of non-cat owners stated this was a problem but only 9.8% of cat owners have ever received a complaint about it from a neighbour, so there is clearly a communication gap” says Jon.

There could be an easy solution to the problem; it was found that 85.3% of cat owners don’t provide an outside toilet in their own garden. Just digging a hole and filling it with sand and gravel for their pet to use could be the route to more harmonious living.

A full report of the findings from the Neighbourhood Cat Campaign can be found on the SureFlap (www.sureflap.co.uk/nccreport) and Your Cat magazine (www.yourcat.co.uk) websites.

Recognising the signs that your cat may be under stress:

Cat density: if you see three or more different cats coming to the garden on a regular basis i.e. a couple of times a week, there is a greater chance of conflict with neighbourhood cats.

Open cat door: 24.8% of households who give their cats free access through a plain cat door experience home invasion and aggression.

Food on show: there is a strong correlation between cats entering the house to find food and fighting with other cats.

Behaviour: spraying in the house, becoming agitated when seeing a cat in the garden, hesitating by the cat door before going out were all significantly greater in animals that had previously been injured by other neighbourhood cats.

Personality: Mature adult cats or assertive and active males were more likely to get injured in fights.

Don’t keep ‘open house’: do not encourage any cats into your home even if they are friendly.

Secure access:  install a restricted access cat flap preferably a microchip-operated cat flap, as this doesn’t require the cat to wear a collar.

Enrich your garden: resources such as an outdoor toilet, perches, large bushes and flower pots near the cat flap allow the pet to satisfy its needs closer to home and feel safer.  Encourage other cat-owning neighbours to do the same and the cats will stray less into each other’s territory.

Know your cat: sudden changes in behaviour can indicate that the cat is under stress.  Watch how confidently it leaves the house and returns.  Ensure it has a safe place to sleep uninterrupted.

Feed ad lib:  providing continuous access to food allows cats to eat a little and often.  This will reduce the temptation for them to steal food from neighbours.