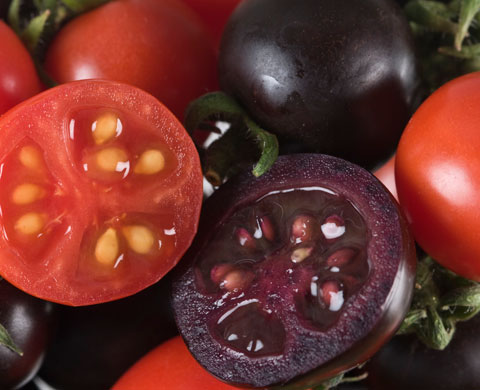 Scientists say the new tomatoes could improve the nutritional value of everything from ketchup to pizza topping.

The tomatoes were developed at the John Innes Centre, on the Norwich Research Park where Prof Cathie Martin hopes the first delivery of large quantities of juice will allow researchers to investigate its potential. She told the BBC:

"With these purple tomatoes you can get the same compounds that are present in blueberries and cranberries that give them their health benefits - but you can apply them to foods that people actually eat in significant amounts and are reasonably affordable.”

The plants, which are being grown in Canada by New Energy Farms within a 5000 square-foot glasshouse, will yield enough tomatoes to produce 2000 litres of purple tomato juice.

The crop will be used to generate new research and industry collaborations and to start the process of seeking the regulatory authorisation needed to bring a commercial juice to market.

The purple colour of the tomatoes is derived from high levels of anthocyanins, compounds normally found in blueberries, blackberries and other deeply coloured berries.  Introducing this compound into tomatoes offers the potential to supply an expensive compound more economically to large markets such as food, livestock feed, cosmetics, food colourings and even pharmaceuticals.

The tomatoes and juice are to be used to study the effects of a high anthocyanin diet on cancer, cardiovascular disease and other chronic diseases. Other varieties, high in compounds such as resveratrol normally found in red wine, are already being used to develop skin care products in collaboration with Essex company Biodeb.

Bringing the juice to the food market will require regulatory approval and may be possible in as little as two years in North America.

The research so far has been funded by the EU and through the John Innes Centre’s strategic funding from the Biotechnology and Biological Sciences Research Council. With Professor Jonathan Jones from The Sainsbury Laboratory, Professor Martin has formed a spin-out company, Norfolk Plant Sciences, to explore the commercial potential of plants with increased levels of health-giving compounds.