Doris leaves gift of hope for people with Alzheimer's 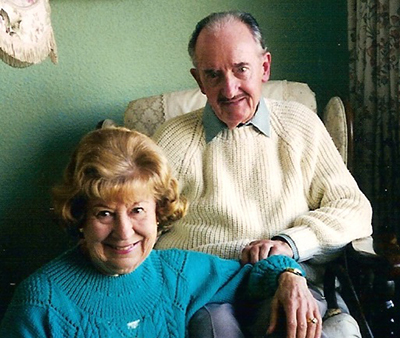 Alzheimer’s Research UK has received a gift of £5,000 from the late Doris Cooper who lived in Codicote, Hertfordshire, and passed away in January 2014, aged 94. Doris left the gift in her Will to the UK’s leading dementia research charity in memory of her younger brother Ronald Procter, who died with Alzheimer’s disease in 2013.

Doris grew up in North London with her younger sister Irene and was 13 by the time Ronald was born. The baby of the family, he enjoyed plenty of attention from his adoring sisters. After leaving school, Doris went on to learn secretarial skills and during the Second World War volunteered at The Whittington Hospital in Islington. During that time she met her first husband, Gordon Duff, and married at the age of 23. As Gordon was serving in the British Army they didn’t get to live together until after the War when he took a job in Nairobi, Kenya, and sent for Doris to join him.

Although Doris later separated from Gordon, her love affair with Africa began and she lived there for 25 years. She enjoyed the lifestyle, the sunshine and her job as a PA for the Shell Oil Company. She went on to re-marry, and found her soul mate in Len Cooper, who was later awarded an MBE for his services to industry. The couple reluctantly returned to the UK in the early 1970s when the politics in Kenya changed. They settled in Paignton, Devon.

Doris’s niece, Julie Mesher, lives in Stotfold, near Hitchin. She talked about her aunt, who she affectionately referred to as Babs:

“I always think of Babs as a fun loving aunty. My brother and I spent six glorious weeks with her in Kenya when we were youngsters. I remember her singing songs at full volume in Swahili and building sandcastles on the beach. Although she wasn’t one to express her feelings, I know she was very fond of us - we were like the children she never had. She also loved our dad [Ronald] dearly and was in denial when he was diagnosed with Alzheimer’s. Although she found it hard to talk about the subject, she wanted to do something positive to help and decided to leave a gift to Alzheimer’s Research UK.

“My dad lived with Alzheimer’s for 10 years. An intelligent man, he worked as an oil executive for most of his career. It was terribly sad to see his gradual decline. One by one all his pleasures slipped away, golf, tennis and Bridge, a game he’d been expertly taught by his sister Babs many years before. Eventually, he couldn’t wash or dress himself and lost the ability to walk and swallow. But his enjoyment of music lasted until the end - he used to whistle and tap his foot. My mum looked after him with the help of carers but it was awful knowing there were no treatments available to stop this disease in its tracks.

“When Babs lost her husband Len, she came to live nearer to us in Hertfordshire. Leaving Africa had been a huge wrench, leaving her sea view in Devon was also hard. But being near the family again meant a lot to her and I used to take my dad and Babs on regular visits to one another. Babs kept in good health and although she became rather frail in her later years, she managed to avoid hospital right up until her 94th birthday. She simply died of old age.

“She was a kind and generous lady and remembered several charities in her Will. My dad would be proud to know the gift she left to Alzheimer’s Research UK will bring scientists closer to finding the preventions and treatments so urgently needed.”

“We are so grateful to Doris for remembering Alzheimer’s Research UK in her Will. Her generous gift of £5,000 will pay for 250 hours of world-class scientific research. This will bring us closer to finding new ways to diagnose, prevent, treat and cure dementia. We rely on public donations and gifts in Wills pay for one in three of our research projects. However big or small, these gifts allow ordinary people to make an extraordinary impact on our crucial research into Alzheimer’s disease and other dementias.

“There are over 830,000 people in the UK living with Alzheimer’s disease and other forms of dementia today, including over 14,000 people in Hertfordshire. Dementia poses one of the greatest threats to public health but funding for research still lags far behind other serious diseases.”