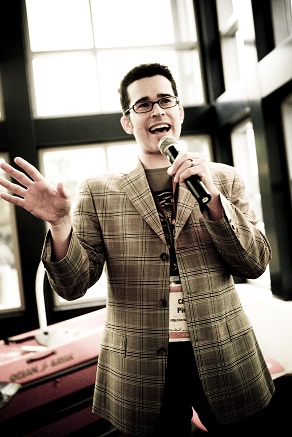 Communication Coach Jon Torrens prefers introverts to extroverts, and explains how they can win every time when it comes to speaking.

I always thought that introverted meant a quiet person, and extroverted a loud person. But those labels are based on where you get your inspiration and energy from, not how much noise you make. And no-one fits into one label or the other; we’re each a mixture of both, adopting each role depending on the situation we’re in. I’m a communication coach who’s done quite a bit of stand-up comedy, so I must be an extrovert, right?

Wrong. I’m mainly introverted like a lot of stand-up comics, who spend most of their time alone, writing, rehearsing and travelling. When coaching or speaking, I certainly feed off the audience, but this is a very small proportion of my time each week – mostly I’m preparing.

When I see someone speaking confidently, it’s often re-assuring and enjoyable. However, it’s not as interesting as watching someone who is coming out of their shell, and who I’m learning about as they continue. This is a trick that stand-up comics sometimes use, playing a character who appears inept at being entertaining but who then pulls the rug out from under the audience’s feet by actually having the skills.

That incredibly confident speaker you’ve seen has – and may still have – the same insecurities as you over speaking in front of a group. Don’t make the mistake of thinking that some people are born with a gift for oratory, it’s mostly down to hard work. This was true for Churchill, Kennedy and Steve Jobs, and it’s true for all the TED speakers, too.

Being extroverted or introverted isn’t important. What’s vital is that you are yourself.

Which Presenter Are You?

How to Look Confident