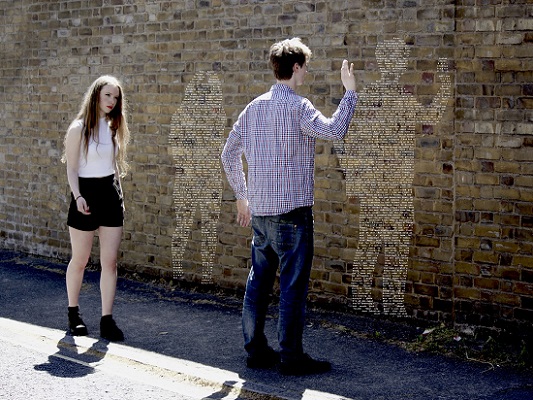 Do we realise how easily our phones can be hacked into in a matter of minutes? That our income bracket, bank passwords, movements, and even home address can be found by anyone with basic coding skills, let alone by data mining companies? Are we controlling technology sufficiently to create the utopia it has the potential for, or is it tipping us into dystopia?

These are the questions asked by provocative young artist Mark Farid, who hit the headlines in 2014 with his bid to live in the virtual reality of someone else’s life, wearing a headset for 28 days[1].

Cambridge-based arts and technology organisation Collusion has selected Farid from a strong shortlist to award him a major commission and five-month residency, which started last week  (8 June). The commission calls for a new digital public work that connects with Cambridge as a world centre of technological growth, that interacts with the public, has a physical presence and sense of boldness, as well as harvesting real-time data. During the residency Farid will work with Collusion and a number of experts to explore the subject chosen for the commission. There will also be opportunities for the public to get involved. The final work will be revealed in October 2015 as part of the University of Cambridge’s Festival of Ideas.

“My generation has grown up with technology and we assume that technology is grown up too,” says Farid. “But what if it is not grown up? And what if the internet is controlled by big businesses that use our data as commodity? It’s as if we are leaving not only our private diaries and wallets open, but also who our friends are, what we’re thinking, and our biggest insecurities – the insecurities we wouldn’t even speak to our loved ones about. We’re more honest with Google than we are with anyone else. We believe companies gathering personal data leave us anonymous, but in fact we may be sharing more than we realise.”

Farid’s project ‘Data Shadow’ has a clear aim: to make the public aware of the privacy they are potentially sacrificing through regularly using a mobile phone and the internet. “I did a test and realised our phones send out around 350,000 messages a day to connect to WiFi, or websites sending data of your activity to multiple other websites, websites I’ve never heard of from around the world” says Farid. “I only have basic programming skills but it’s worrying how quickly I could gain access to people’s phones.”

Farid intends to make visible the data that is normally shared invisibly, yet open to theft by hackers. He will do this by creating ‘data shadows’ (see image) which play with the idea: what if all the data held in your phone were available to all?

How will it work? When a member of the public voluntarily connects to participate in this artwork at one of the special free WiFi spots in Cambridge city centre, Farid’s system will take a limited amount of the personal data from their phone (filtered for privacy) and project it onto the hard surfaces around them, creating a ‘shadow’ of their movements as they walk down the street. They will have chosen to participate and been made aware that their information has been made public.

What Farid, son of two psychiatrists, is particularly interested in is the participants’ reactions to this exposure. Is it acceptable? What level of privacy is desirable? Have we made a Faustian pact with technology or are its benefits too great to allow ourselves to question it?

Collusion, run by Rachel Drury and Simon Poulter, is a creative agency working at the intersection of arts, technology and human interaction. They created, and raised the funds for, the commission. Sponsors of the commission are the Arts Council England, technology company The Technology Partnership (TTP) and the University of Cambridge. TTP and University of Cambridge researchers will also offer expertise, technical assistance and help the artist tackle the questions of privacy and security he plans to explore. The culminating event of Farid’s residency will take place during the Cambridge Festival of Ideas, 19 October to 1 November.

The commission’s three short-listed artists spent two days in Cambridge to develop their project proposals. They talked to academics at the University of Cambridge’s Computer Laboratory, Big Data Initiative and Cambridge Centre for Health Services Research. They also met with staff at TTP. Overall they heard about a range of Cambridge initiatives which might inform their work: 3D printing of blood and DNA, the creation of Sonic Pi, a technical cure for bird flu, street lighting control, acoustic technologies, satellite broadband, medical wearables, personalised medicine, and more.

Farid is hoping to collaborate closely with several Cambridge companies and academics in the course of his residency.

Rachel Drury and Simon Poulter, Directors of Collusion said: “ Collusion aims to work with artists, technologists, academics and others to explore new tech and the ideas and issues that emerge. Art offers an amazing opportunity to highlight these issues and facilitate important conversations so we’re delighted to be working with Mark to realise Data Shadow as the awardee of our 2015 Real Time Commission”.

Nicky Buckley, Head of Public Engagement at the University of Cambridge, expressed her support:“The Cambridge Festival of Ideas is pleased to be working with Collusion, TTP and Arts Council England in commissioning Mark Farid to produce an art work to be presented at this autumn's festival. His ideas about personal data capture are important, and offer the opportunity for him to collaborate with computer scientists and others working on these issues at the University.”

Clennell Collingwood of TTP said: “As a leading UK technology and product development company, TTP is keen to encourage the debate: how can we balance the benefits of technology with our right to privacy? There is no doubt in our minds that ubiquitous access to data networks drives technology and economic growth, assisting with an ageing population, a growing social divide and increasing energy consumption. But a discussion needs to be made around data privacy and ownership. We are pleased to be assisting with funding Mark’s project, and look forward to seeing the results”.

Antonia Byatt, Director, South East and Literature, Arts Council England, said: “We are pleased to be supporting Collusion through our Grants for the arts programme alongside the University of Cambridge and TTP – both of which are intrinsic to Cambridge’s technological excellence. Mark Farid’s digital concept is both exciting and provocative. Through creating a ‘data shadow’ for all to see, it challenges us to look at the consequences of how we use our mobiles on a daily basis and how this could impact on our privacy. The arts have always been a way in which people can challenge perceptions and this project will reflect that tradition in a modern, digital age.”


About Mark Farid
[1] Mark hit the headlines in 2014 with his bid to live in virtual reality for 28 days wearing an Oculus Rift headset and living the life of another man. The project is called ‘Seeing-I’ and Farid is still raising funds for it. See media coverage:
https://www.google.co.uk/webhp?sourceid=chrome-instant&ion=1&espv=2&ie=UTF-8#q=mark farid

In Seeing I he asks: Does social media give us the illusion of companionship without the demands of relationships? Does it mean we do not know how to be alone, but rather we only know how to be lonely?

Mark graduated from Kingston University with a First Class in Fine Art in 2014 and has participated in group and solo exhibitions in London, Paris, Frankfurt and Abu Dhabi.

About Collusion
Collusion is a playful, experimental not for profit agency based in Cambridge that operates at the intersection of arts, technology, and human interaction. We facilitate collaborative interdisciplinary explorations focusing on new work with artists within the area of embedded and locative systems - including the wider generic concepts of the internet of things and smart cities. We aim to:

TTP is an independent technology company where scientists and engineers collaborate to invent, design and develop new products and technologies. Working across a wide spectrum of industries including health, telecoms, industrials and consumer, TTP creates breakthrough solutions that bring strong commercial value to clients and the benefits of technology to all.