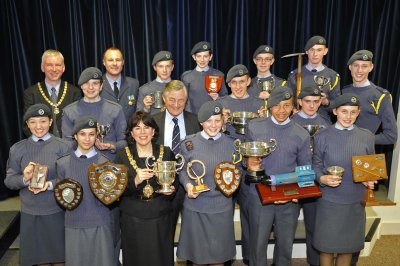 Young Air Cadets from 104 (City of Cambridge) Squadron have celebrated their achievements for 2010 at their annual presentation of awards held in the conference suite at Cambridge Airport. Awards were presented by Councillor Sheila Stuart, the Right Worshipful the Mayor of the City of Cambridge.

The evening began with the Mayor and Squadron Chairman, Sir Michael Marshall, inspecting the guard of honour before a group of cadets gave a review of the year to the assembled invited guests, parents and families.  Following the Commanding Officers annual address and report the Mayor was formally introduced by the Squadron Committee Chairman, Sir Michael Marshall.  The Squadron has been strongly supported by Marshall of Cambridge since uts foundation in 1939.

The awards are split into six sections; training awards, awards for project work, sports awards, inter-flight awards, awards for personal achievement and the Marshall Challenge Bowl.  One big winner from the evening was Cadet Rhuben Smith who walked away with three trophies; The Percussion award, The Steven Lawrence Trophy for best turned out cadet and The RAFA Cup which is presented to the cadet who collected most money during the Wings Appeal.

This years winner of the Sir Dennis Crowley-Milling Trophy for outstanding personal achievement was awarded to Cadet Flight Sergeant Jemma Hubbard.  Jemma has had a very busy year, both with and away from the Squadron.

As a qualified swimming teacher she had been working very hard alongside her A Level studies to provide lessons at the Frank Lee centre at Addenbrooke’s Hospital and has been successful in her application for the position of Theatre Support Worker to cover her gap year before she goes to University next autumn.  On top of this she has continued to work hard for the Squadron leading the band with great enthusiasm and taking the lead in the organisation of Squadron sports events.  As the most senior cadet on the Squadron, she is well-liked and enjoys the full support of the Cadets and Staff.

The most prestigious trophy is The Marshall Challenge Bowl, presented to the cadet deemed to be the Squadrons best cadet.  This year the winner of the Challenge Bowl was Cadet Sergeant Adam Hartwell.  Adam has demonstrated over the past year a commitment to the Squadron which is second to none, he has taken part in various activities ranging from car parking at Duxford to parades, he has represented the Squadron and Wing in sports and attended camps both in the UK and overseas.  He has supported the cadets in his care and played an active role in their training and development whilst at the same time organising Squadron events alongside staff members.  Adam is a switched-on, enthusiastic, well presented and well prepared individual and is a worthy winner of the Marshall Challenge Bowl.

Following the awards the Squadron padre enrolled eighteen new recruits to the Squadron as proud families looked on.  The evening ended with refreshments which allowed cadets and their families to mingle with the invited guests.

Councillor Sheila Stuart, Mayor of the City of Cambridge said: ‘I felt truly honoured, not just attending the Awards Ceremony but, actually to be invited to make the individual presentations.  The reputation of No 104 (City of Cambridge) Squadron of the Air Training Corps is truly outstanding amongst the uniformed youth groups in this area and this is down to the calibre of the young people who join and the excellent training and development opportunities provided.’

Sir Michael Marshall said: ‘It was a delight to welcome Councillor Sheila Stuart to Marshall of Cambridge to present the Annual Awards for No.104 Squadron.  The Squadron was founded in 1939 as a result of a joint initiative between Cambridge University Air Squadron, my father, Sir Arthur Marshall, who became the first Civilian Chairman of the Committee, and the Mayor of Cambridge Alderman A A Spalding.  Since the foundation of the Squadron it has maintained very strong links with the City of Cambridge and these were reinforced in 1999, when the Honorary Freedom of the City of Cambridge was bestowed upon the Squadron.’

104 (City of Cambridge) Squadron meet on Wednesday and Friday evening at our headquarters on Newmarket Road.  For more information about joining as either a cadet or member of staff please contact 01223 295324 (Wed and Fri Evenings) or email info@104atc.org