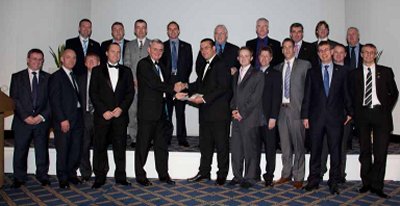 The joint Marshall Slingsby and BAE Systems Design & Development team came together initially when they were given the challenge to build a fully-bonded carbon composite Wing and Tail set for the Mantis UAV.  This played a vital part in the production of the Mantis UAV, which is the UK’s largest fully-autonomous unmanned aircraft.

The ceremony took place on Thursday 9th December at the RAeS Headquarters in London where a silver medal was awarded to the team for an exceptional contribution to aerospace and each individual received a special certificate.

About Mantis
Mantis is a fully autonomous next generation unmanned aircraft and is the largest ever to be built in the UK. It has a wing span over 20 metres and a fuselage length of over 10 metres, and is BAE Systems’ first all-electric aircraft. Mantis was produced by the largest fully bonded composite assembly in Europe, and its maiden flight was completed on 21st October 2009 in South Australia.