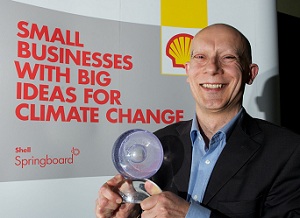 A Cambridge-based business with an innovative idea to combat climate change has won £40,000 from the Shell Springboard programme, designed to promote the growth of green businesses in the UK.

The Shell Springboard programme has awarded over £1.6 million to 43 UK small businesses since it launched in 2005. The programme helps small businesses make an impact in the fight against climate change by providing a no-strings-attached financial boost to companies with innovative products and services that could help reduce greenhouse gas emissions.

Dr Robin Francis, CEO of Cambridge Carbon Capture said: “We really believe our technology can make carbon capture and storage into a profitable solution for tackling CO2 emissions and it’s incredibly rewarding that such a well established programme as Shell Springboard has also recognised its potential. The funding and recognition we received tonight will allow us to press ahead with our ambitions.

The capture of the CO2 in solid materials avoids issues of transport and long terms storage of liquefied CO2. Furthermore, the integration of power generation and capture steps, along with the conversion of low value materials to higher value products, greatly improves the process economics versus other carbon capture technologies.”

Arne de Kock, UK CCS Project Director at Shell said: “It is encouraging to see UK businesses generating innovative ideas and solutions to reduce carbon emissions. We have seen some technologies that could significantly impact industrial and commercial-scale projects such as carbon capture and storage (CCS). I believe CCS applied, for example, to gas and coal power stations will be critical in meeting
growing demand for cleaner energy. Congratulations to Cambridge Carbon Capture for impressing the judges with their technology. I wish them every success in developing and growing their businesses.”

James Smith, Chairman Shell UK, said: "Low carbon innovation creates real opportunities for British industry. The UK has huge talent and creativity in this area. In the last six years Shell Springboard has awarded over 40 small businesses with a total of £1.6 million to advance their new business ideas for products and services to tackle climate change. I look forward to meeting Cambridge Carbon Capture
at the final and wish them every success.”

Cambridge Carbon Capture competed against five businesses from across the UK on 25 January 2011 in Edinburgh and will now compete to be named as the overall UK winner in London on the 22 February.

Petroc Technologies from Edinburgh also received an award of £40,000 to help develop its technology that prevents leakages from underground reservoirs used in Carbon Capture and Storage (CCS) by providing a self sealing method for the stored CO2.

Cambridge Carbon Capture is an IdeaSpace start-up, based at The Hauser Forum on the University's West Cambridge site. Another IdeaSpace start-up and Cambridge Network member, Polysolar, was last year's Cambridge region winner. Hamish Watson, CEO, is speaking at the Shell Springboard event at the Moller Centre next week (8th Feb).

To find out more about Shell Springboard visit www.shellspringboard.org.uk

For further information on Cambridge Carbon Capture please contact the company at
info@cacaca.co.uk