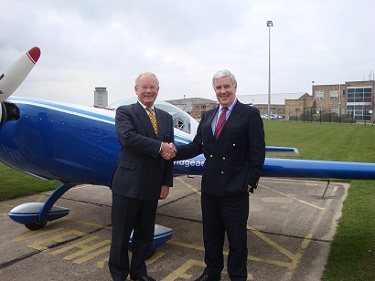 Terry Holloway, Group Support Executive at Marshall of Cambridge, celebrated the 50th anniversary of his first solo flight with a solo flight in a Cessna 172 of the Cambridge Aero Club yesterday (21st March 2011).

Terry, who has worked for Marshall since his retirement from the RAF in the rank of Group Captain in 1995, flew his first solo at Christchurch airport in an Air Cadet T31 training Glider on 21st March 1961, just weeks after his 16th birthday.  Since then he has amassed over 8,500 flying hours in over 150 different types of aircraft and gliders and remains in current flying practice, both for business and pleasure.

Yesterday, Terry (left) was congratulated by Iain Young, the Marshall Aerospace Chief Test pilot, who is pictured with him.

Iain Young said: “Fifty years of solo flying is a remarkable achievement and in Terry’s case it is all the more remarkable because it has been mostly in single engined aircraft and gliders as 'Single Pilot operations'.  Terry is a very capable and enthusiastic pilot”.

Terry Holloway said “I have been lucky that continuing good health has enabled me to continue to fly.  I have particularly enjoyed my “solo celebratory flight” which brought many happy flying memories flooding back. Probably my most memorable flight to date was in 2000 when, with a friend, I flew a light aircraft from Cambridge to the west coast of the USA, although the adventure of being one of the first Englishmen to fly a glider over Mount Aconcagua – the highest mountain in the Andes at 22,482 ft - was also a breathtaking experience!”