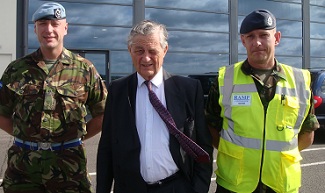 In this spirit of this event, two Reserve Servicemen employed by Marshall of Cambridge – Trevor Jaeger and Gareth Rundle - wore their uniforms to work at Cambridge Airport.  Trevor is a Reservist with the Royal Air Force Regiment and Gareth with the Army Air Corps and both have seen active service in Afghanistan.  In his normal job, Trevor is an aircraft handler and marshaller and Gareth is an aircraft refueller.

In the photograph, Sir Michael Marshall, Chairman and Chief Executive Officer of Marshall of Cambridge (Holdings) Ltd is seen with Gareth (left) and Trevor.

Sir Michael Marshall said: ‘The Company has provided strong support for Reservists over a large number of years and we are exceptionally proud of the work our employees do supporting the country as Reservists.  We also strongly support Reservists through the Air Training Corps, which is celebrating the 70th Anniversary of its foundation this year’.

Sir Michael Marshall is himself a Reservist as Honorary Air Commodore of No 263 Squadron of the Royal Air Force Regiment based at RAF Honington.