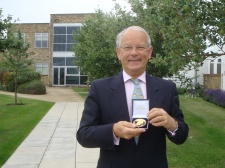 Terry Holloway has been awarded the Air League’s highly prestigious Jeffrey Quill Medal by His Royal Highness The Duke of Edinburgh at a ceremony in St James’ Palace.

Jeffrey Quill was Supermarine’s very distinguished Chief Test Pilot during the Second World War, and the Quill Medal is awarded each year in his memory for significant endeavour in the field of encouraging air mindedness.  Previous recipients of the Quill Medal have included former Test Pilots Neville Duke and Alex Henshaw, The Director of the RAF Museum Dr Michael Fopp, and former Red Arrows boss, the late Roy Hanna and Director of the Royal International Air Tattoo, Tim Price.

Terry Holloway was awarded the medal at The Air League’s Annual Reception and Air League Chairman, Keith Mans, in outlining reasons for the Quill Medal being awarded, said: “Terry Holloway has been a driving force in Aviation for the last 50 years since he learned to fly as an Air Cadet and has been an Air Experience Pilot for both the Air Training Corps and the Girls Venture Corps for well over 40 years.”  Mr Mans added: “Terry Holloway has also the driving force behind the Youth in Aviation Initiative started by The Air League ten years ago, which is now gaining National prominence through ‘The Leading Edge’.”

Terry Holloway said: “It is an enormous honour to have been awarded this medal.  I was delighted that my wife, together with her daughter and husband, who live in New York, were able to be present in St James’ Palace to see me receive the wonderful award from Prince Philip.  I look forward to supporting The Air League and its initiatives in the field of aviation for a number of years to come.”

The Air League was founded in 1909 in order to promote the interests of British Aviation.  It has been supporting major developments in aerospace for over 102 years and continues to lobby and ensure that Great Britain continues to match the World in this key technology.  The Air League founded the Air Training Corps, which celebrates its 70th Anniversary in 2011, and each year over 150 flying and engineering scholarships are awarded to young people in order to encourage their careers in aviation.  His Royal Highness Prince Philip The Duke of Edinburgh has been patron of The Air League for the last 54 years.
www.airleague.co.uk

Terry Holloway flew his first solo flight in an Air Training Corps Glider on 21 March 1961 and earlier this year, on 21 March 2011, celebrated his 50th Anniversary with a solo flight in a Cessna 172 Training Aircraft.  He gained his Private Pilots Licence in 1963 having soloed in a remarkable three hours and twenty five minutes.  In total Terry Holloway has flown over 8,500 flying hours in gliders and powered aircraft, which number 190 different types of aircraft and glider.

Terry Holloway was educated at King Edward VI in Southampton and was a member of No 424 (City of Southampton) Squadron Air Cadets.  He is currently the Civilian Secretary of the Committee of No 104 (City of Cambridge) Squadron Air Training Corps and works full time as the Group Support Executive for the Marshall of Cambridge Group of Companies.