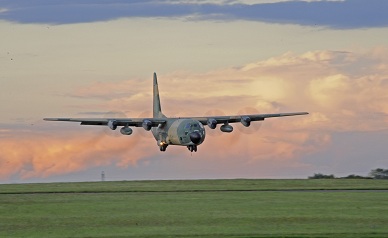 A Nigerian C130 Hercules aircraft on route from Kano in Northern Nigeria to Cambridge suffered radio failure somewhere over France during the late afternoon of Saturday (27 August 2011).

Using the aircraft’s transponder, the aircraft pilot was able to notify radar stations on the ground and Air Traffic Control that he was unable to communicate with them and subsequently two French Air Force Mirage Fighters were scrambled, which escorted the Hercules through French Airspace.  The escort of this aircraft was taken over by two Royal Air Force Typhoon aircraft when it entered UK Airspace and the Hercules, which was being flown by Nigerian crew, landed at Cambridge Airport at 19.37 on Saturday.

Terry Holloway, Group Support Executive for The Marshall Group of Companies, said: ‘The crew of the aeroplane took the right actions in continuing their flight to Cambridge, which was the destination on their flight plan, and by notifying ground stations using the transponder in the aircraft cockpit’.

Terry Holloway added: ‘The aircraft is with Marshall Aerospace for major servicing and will be in Cambridge for a number of months before returning to Nigeria’.