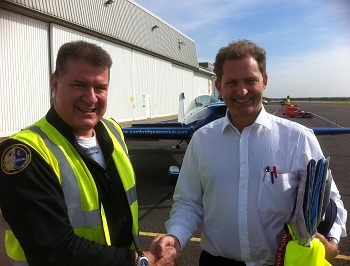 The flight took place in a Cessna 172 of the Cambridge Aero Club appropriately with the registration G-HERC, this registration noting Marshall of Cambridge’s long association with the C-130 Hercules aircraft which is Graham Macfarlane’s normal “mount” as a Marshall Aerospace Test Pilot.

Robert Marshall gained his Private Pilot’s Licence in 2010 at the Cambridge Aero Club and, since then, has amassed nearly 300 hours of flying experience which has included a flight to the South of France.

In gaining his Private Pilot’s Licence, Robert Marshall is the third generation of the Marshall family to gain a pilot’s licence, his grandfather, Arthur, later Sir Arthur Marshall, gained his pilot’s licence in 1928 and his father, Sir Michael Marshall, gained his Private Pilot’s Licence in 1949, shortly after his 17th birthday.

Graham Macfarlane said “Robert flew a very well prepared IMC Rating test flight and it is very clear that he is a very natural pilot who is following in the footsteps of both his father and grandfather.”

*Wikipedia says: Instrument meteorological conditions (IMC) is an aviation flight category that describes weather conditions that require pilots to fly primarily by reference to instruments, and therefore under Instrument Flight Rules (IFR), rather than by outside visual references under Visual Flight Rules (VFR). Typically, this means flying in cloud or bad weather.

Cambridge Airport primarily targets the east of England market with a strong focus on Cambridge and its business, academic and industrial communities with an estimated 700,000 people living within the direct catchment area and another 800,000 living within an hour’s drive of the airport.

The airport is ideally positioned as a viable alternative for easy access to the City of London with the drive to Canary Wharf being just 50 minutes by fast road connection, and 45 minutes from London, King’s Cross railway station.

A strong provider to the equine community Cambridge Airport is 10 miles from Newmarket and offers regular services for the transportation of horses.