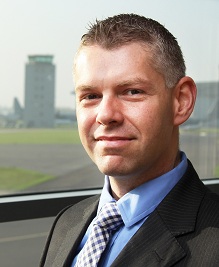 He joined the airport’s management team this week in this newly created role, which will see David take responsibility for developing Cambridge Airport as the airport of choice for niche premier and business short haul airline operations accessing the East of England.  He will report to Archie Garden, Airport Director.

David joins the dynamic Cambridge management team from London Oxford Airport where he held the position of Head of Customer Services & Route Development responsible for the airport’s handling proposition and commercial aviation strategy. His experience as Sales and Marketing Manager at Air Mauritius where he looked after the airline’s UK and Ireland market development; combined with highly relevant management positions held at major organisations including Star Alliance, ANA (All Nippon Airways), Helios Airways and STA Travel makes him well positioned to advance Cambridge’s ambitions of developing niche scheduled flights.  David’s first foray into aviation was in sales with British Airways.

Archie Garden, Director of Cambridge Airport commented: “We are delighted to welcome David with his extensive experience in airline sales, marketing and customer relations. Recent research from the CAA demonstrates that the residents of the greater Cambridgeshire area have a significantly above average propensity to travel by air. We are keen to support their requirements and are are truly excited for the future development of regional airline business at Cambridge Airport.”

Cambridge is home to extensive local pharmaceutical, technological and academic communities requiring easy access to major financial and industrial areas in Europe. In his new role, David will support the development of routes to meet these requirements.

David Surley adds: “With its high-tech industry and as one of the UK’s most famous and academically acclaimed cities, I can’t think of a more exciting regional airport to be part of than Cambridge. I’m looking forward to helping develop Cambridge Airport’s future and capitalizing on the opportunity for regional airline growth.”

The residents of greater Cambridgeshire took four million flights in 2010, equating to nine per person for Cambridge-based residents and two per person for those living in outlying areas.  Of those, around a third were business-related trips.  Key business short-haul destinations identified locally include Edinburgh, Dublin, Amsterdam, Glasgow and Dusseldorf with Chicago identified as a key US opportunity.

Cambridge Airport is one of just five regional airports in the UK capable of accepting business and passenger services with a 24/7 slot allocation during the 2012 Olympics period. The airport, which has 24 hour security patrols, has no runway restrictions as it holds a Public Use license, and can accept the operation of public transport aircraft up to Boeing 757 and Airbus A320 size.

It is also an excellent alternative destination for London-based traffic, especially for travellers to and from the US as the airport location lies directly on the flight path that avoids London’s busy airspace.

With a 1965m/6447ft runway accepting aircraft up to Boeing 757 or Airbus 320 it is suitable for intercontinental business jets as well as small cabin aircraft.  It boasts CAA Category 7 Fire & Air Traffic Control status and has full navigational aids and communications, which include radar approach coverage up to 30nm.  It has invested in a new GPS approach to complement its ILS system.

Cambridge Airport primarily targets the east of England market with a strong focus on Cambridge and its business, academic and industrial sectors. A strong provider to the equine community Cambridge Airport is 10 miles from Newmarket and offers regular services for the transportation of horses.

Cambridge Airport is home to a variety of aviation service providers including FBO ExecuJet Europe and the charter operator Marshall Executive Aviation, MEA which operates a Cessna Citation Bravo and Citation XLS as well as a Bombardier Challenger 300.

Other aviation companies include Capital Air Services and several GA flight training operators. It is also home of the East Anglian Air Ambulance service operated by Bond Helicopters. A fully authorised Cessna Service centre is located at the airport.