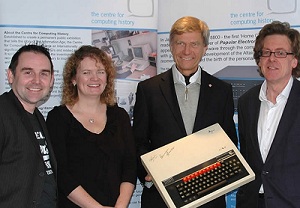 Cambridge-based serial entrepreneur and venture capitalist, Dr Hermann Hauser has been named as the patron of the Centre for Computing History.

A leading figure in the worlds of technology, science and business, Dr Hauser has agreed to take on this important role 30 years after the company he co-founded - Acorn Computers - unveiled the BBC Micro, the machine which, along with the Sinclair ZX Spectrum, epitomised the British home computer boom of the early 1980s. The BBC Micro ultimately changed the history of computing in the UK by bringing home computing within reach of the general population. In 1984 he was voted the UK's 'Computer Personality of the Year'.

In the late 1980s Acorn went on to develop the ARM processor forerunner of the processors still manufactured by ARM Holdings and found in 95% of today’s mobile phones. Since then Hermann has been responsible for setting-up numerous technology companies and in 1997 co-founded Amadeus Capital Partners Ltd, a venture capital company. During his career he developed strong links with Cambridge, and has played a big part in the city’s enterprise culture.

The Centre for Computing History was established in 2006 to tell the story of the Information Age. The museum is on course to open in Cambridge next spring.

Jason Fitzpatrick, Director of the Centre for Computing History says: "I am delighted to announce Hermann Hauser as our patron and view his involvement as an endorsement of our aims. Widely regarded as one of the founding fathers of Silicon Fen and the Cambridge Phenomenon, Hermann’s contribution within the computing sphere and his ensuing career are considered exceptional. As a figurehead for our organization, his invaluable participation cements our progress to date, enriches our vision beyond measure and gives us a new, dazzling focal point.

Dr Lisa McGerty, one of the centre’s trustees adds: "The trustees and I are deeply gratified that Dr Hauser has accepted our invitation to become the patron of the Centre for Computing History. His enthusiasm for the museum has been evident and taking on this role will deepen his connection with us even further. We are truly delighted that he shares an interest in our goals and vision and very much look forward to working with him in the future.”

Dr Hermann Hauser - who is also one of the founding directors of the Cambridge Network - states: "It gives me great pleasure to accept the role of patron. I am fully committed to this initiative to found a computer museum in Cambridge. This area is at the heart of the UK's, if not Europe's, leading technology cluster. As such the city has played – and continues to play - a vital role in the history of computing.

"In addition to celebrating Britain’s outstanding track record in computing innovation, the centre will showcase computing technology and enterprise in the Cambridge region. It will explore the radical and far-reaching impact of technological discovery and invention to spring from Cambridge University and local companies.

"We all recognise that computers have transformed the world we live in. To enable coming generations to understand how it has all happened there has never been a more appropriate moment for a museum of this nature. I hope it will create an experience where young people can truly engage with technology and act as a
catalyst for emerging talent.”

Jason Fitzpatrick continues: "The story of the Information Age and of all the engineers, innovators, inventors and creative visionaries who made it happen is inspirational. The impact of Steve Jobs’ death demonstrates how fascinated people are in the history of personal computing. There is widespread public recognition that, in terms of technology, pioneers like Jobs literally invented the 21st century.

"Moving to Cambridge, the city where so much of this story has unfolded, will allow all our dreams and ambitions for the centre to be realised, to create a world class space with the size and scope for the serious celebration of Computing History in this country. Hermann’s involvement as patron will make all the difference to increasing the pace of what’s possible.”

The campaign to relocate the museum from its temporary home in Suffolk to Cambridge has already attracted substantial sponsorship from a number of individuals and several high profile Cambridge tech businesses, including super-chip designer ARM Holdings, Microsoft Research and award winning Red Gate Software.

The centre’s move to Cambridge will facilitate the next stage of the project. This will involve the development of both a highly ambitious learning programme for schools and a multi-dimensional ‘computing experience’ exhibition, prior to the eventual creation of a permanent, purpose built home in the city.