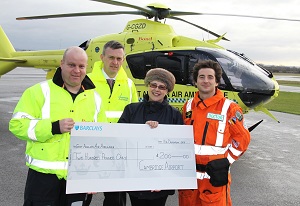 Cambridge Airport sent an alternative Christmas card this year. Instead of distributing the usual client cards the airport chose to donate a cheque for £200 to the East Anglian Air Ambulance unit which is based at the airport.

“The airport has a long standing relationship with the EAAA and we are sure friends of the airport will appreciate our alternative seasonal gesture.. We are delighted to contribute to such an invaluable service,” said Knight.

Earlier this year in April The Marshall Group bolstered the full time presence of the East Anglian Air Ambulance (EAAA) service when a new, dedicated operations centre was opened. The “Archie Morson Centre” was equipped and decorated courtesy of The Marshall Group, and sits at the heart of all EAAA operations in the west of the Anglian region, providing the base for paramedics, doctors and pilots who operate the emergency service.  The presence of Anglia 2, a Eurocopter Bk 117 which has been based at Cambridge since December 2010, combined with Anglia 1 based in Norwich, ensures continued breadth of emergency coverage for the counties of Bedfordshire, Cambridgeshire, Peterborough, Norfolk and Suffolk.