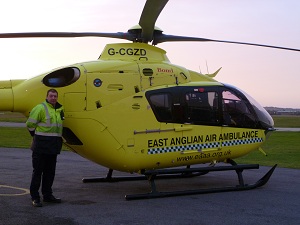 While most people were enjoying a well-deserved rest over Christmas lunch and something warming to drink on Christmas Day, the East Anglian Air Ambulance helicopter, based at Cambridge Airport, was on duty and was called out on an emergency response to Norfolk, returning to its Cambridge Airport base in the early afternoon.

Although Cambridge Airport was closed for the Christmas holiday weekend, aircraft refueller Paul Fordham had offered to be on voluntary stand-by to assist East Anglian Air Ambulance if need be, and unhesitatingly came in and refuelled the helicopter.

Richard Knight, Cambridge Airport Manager said: ‘This showed great commitment from Paul and this voluntary activity by him was very understated.  Quite clearly, without his action, it would not have been possible for the helicopter to operate later that day or during the rest of the holiday shut-down period."

Terry Holloway, Group Support Executive of the Marshall Group of Companies said, ‘The Company has been supporting the East Anglian Air Ambulance for a number of years and this has included fund-raising, as well as practical help.  This initiative and commitment to the East Anglian Air Ambulance helicopter on Christmas Day reflects a real personal commitment and we are enormously grateful to Paul."

The Marshall Group
Founded in 1909 with little capital as a chauffeur drive company in Cambridge, Marshall moved into the retail motor business in 1910, obtained Distributorship for Cambridgeshire in 1920 and entered the aviation business in 1929.  With all its growth funded by ploughed-back profits, the Marshall Group remains a privately owned family Company, with a turnover of over the Austin £1bn per annum.  The Group of Companies is chaired by the third generation of the Marshall family, and employs members of the fourth generation.  The Group currently employs just over 4,000 people working in the fields of aerospace engineering; design and manufacture of specialist vehicle applications, military mobility shelters and hospital surgical units; motor vehicle sales and after sales support; refrigerated transport sales and support; and property ownership and management.   (www.marshallgroup.co.uk)