It's Gold for Keynote PR 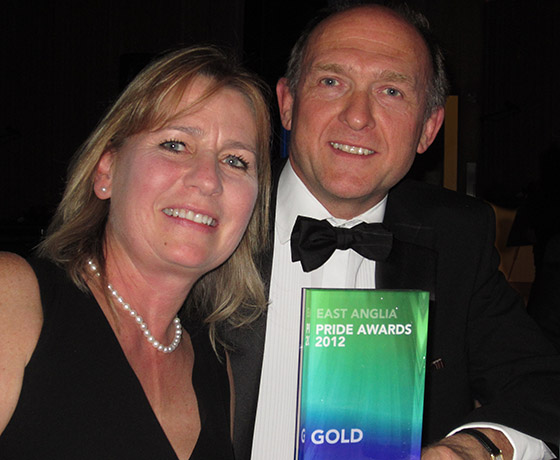 Terry Nicklin of Keynote PR has picked up a coveted award at the CIPR Pride Awards...

Terry Nicklin of Keynote PR won a Gold Award and was named Best Freelance Practitioner in the 2012 CIPR East Anglia Pride Awards at a glittering ceremony at Ickworth House.

The Judges commented: "Terry clearly has a wealth of experience, strong background and track record which serves his B2B clients in the technical and professional services well.

Adopting an holistic approach, taking in the full marketing mix, Terry is demonstrating tangible results in the European, national, regional and sector specific media, as well as developing executive profiling for his clients. Positive stakeholder feedback, as demonstrated by testimonials, is earning Terry referrals to grow the business.

Campaigns are targeted, well thought out and run to tight deadlines and budgets."

Terry’s work for a number of B2B clients was highlighted, especially his work with Nexeon in helping them to move from ‘stealth’ mode to being a major voice in the rechargeable batteries sector. A wide range of marketing tools was deployed including web site, blog, press releases, feature articles, photography, video, events and so on, ensuring that stakeholders were well aware of the company’s achievements and exciting plans.

CIPR CEO, Jane Wilson MCIPR comments: "The CIPR PRide Awards celebrate the best PR and communications campaigns and teams from the profession across the UK. To achieve a CIPR PRide Award demonstrates exemplary achievement, impact and value – immediately putting your work in the spotlight. The sheer number of high quality entries received this year is testament to a thriving nationwide industry."

The CIPR PRide Awards is the only UK-wide awards scheme that recognises excellence in public relations and communications work across Scotland, Wales, Northern Ireland and the English regions.

Keynote PR is a Cambridge-based PR and marketing communications agency working with business clients to raise their profile and improve business success.