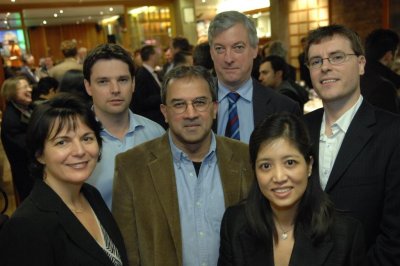 In an event marking the launch of the 2008 Ignite programme earlier this month, members of both the corporate and academic worlds came together to hear guest speakers discuss the academic, personal and business networks both in Cambridge and beyond.

Dr Uday Phadke, Founder of Cartezia, was the keynote speaker and in an inspiring presentation noted that “Innovation rarely happens in a vacuum and social networks are crucial for success.”

Cambridge has rightly acquired an international reputation as an excellent location for start-ups, particularly in the hi-tech sector. The Ignite programme (developed, managed and delivered by the Centre for Entrepreneurial Learning), for aspiring entrepreneurs and corporate innovators, is making a valuable contribution to the development of the Cambridge cluster through nurturing new talent and fast-tracking innovations to commercial readiness. It facilitates networking by providing access to the Cambridge entrepreneurial network and bringing together highly experienced entrepreneurs and corporate experts together with would-be entrepreneurs from across the globe.

Social networking has always been considered important to business success but for the entrepreneur, it can be essential.

Ignite alumnus Natasa Milic-Frayling, Senior Researcher of Microsoft Research, was part of a panel together with Ben Halford, Founder of Surface Generation; and Dr Shamus Husheer, CEO of Cambridge Temperature Concepts which discussed their experiences of developing networks.

Natasa commented: “More and more people find themselves living in different places and different cultures. I grew up in former Yugoslavia, studied and worked in the States, and spent last 10 years in Britain. Each move is a new start and requires quite an effort to integrate with a new environment. For me it was Ignite that revealed the drive and energy of the Cambridge entrepreneurial community.”

She considers Cambridge a good place for entrepreneurs and those wishing to access European markets; “Projects funded by the EU Commission bring together partners from industry, academia, and public sector. They aim to invigorate the EU economy by looking for opportunities to commercialize technologies and services developed by the projects. This is a perfect place for people with entrepreneurial skills and anyone who wants to expand their network across the EU.”

Cambridge must be doing something right as one of the 2007 alumni, Diego Marino, Founder of the software business ‘Think In Grid’ (a spin off from the GridCat-i2Cat research group at the Politechnical University of Catalonia), is moving here from his native Barcelona to take advantage of the opportunities in the Silicon Fen. Think In Grid (www.thinkingrid.com) is focused on increasing interaction between users, devices and organizations using the power of Grid Computing technology.

Diego commented: “Cambridge is full of companies suitable for partnership with us due to their research in embedded systems. Also, there is a demand for solutions which can only be solved with disruptive technologies. So, for us it is easier to find customers or partners in the Cambridge area than in the whole of Spain. We expect that relocating to Cambridge will help us to increase our customer base and develop our products.”

In addition, he believes he will find people with the right skills and expertise to fit the organisation. Diego stated: “Students who have studied Computer Sciences at Cambridge University not only have a strong background they are also in contact with cutting edge technologies and immersed in a community in which entrepreneurship is highly valued.”

Diego found attending the Ignite programme helped him to make decisions about relocation. “The Ignite Programme has proved to be a key turning point in my entrepreneurial career. Apart from showing me the opportunities that Cambridge can offer to my company, it also demonstrated that going global is not as hard as you may think at first.”

The Centre for Entrepreneurial Learning has already attracted a range of sponsorship for Ignite and over thirty places have been booked for the tenth programme running from 29th June to 5th July 2008. Agreements are in place with organisations such as the Engineering and Physical Sciences Council (EPSRC), the Cambridge Integrated Knowledge Centre (CIKC), La Caixa Bank, the University of Cambridge’s Department of Chemistry, as well as individual applications from China, Poland, Russia and Singapore. There is likely to be increased competition for the remaining twenty odd places on the programme as the Centre is keen to maintain the high standard by attracting quality business innovations.

For further information about Ignite and to apply, please visit the relevant programme pages on the CfEL web site at www.cfel.jbs.cam.ac.uk

The Centre for Entrepreneurial Learning (CfEL) has been running this intense, one-week training programme (formerly known as the Summer School) for aspiring entrepreneurs and corporate innovators since 1999 with increasing success. The programme is comprised of a blend of practical teaching sessions, one-to-one and group clinics, mentors’ sessions and expert advice from leading entrepreneurs and innovators that will give you the tools, contacts and confidence to transform your idea or innovation into a successful business project or venture. About 300 participants from 25 countries across Europe, Asia and the Americas have attended since the programme started in 1999. The alumni are made up of people from various disciplines and industry sectors such as bioscience, physics, engineering and computer sciences. Over 55 new businesses have been developed and more than £35.5 million in funding has been raised by Ignite alumni in the period from 1999 to 2005.

Uday graduated from Trinity College, Cambridge in 1976 with a degree in Engineering, after which he worked in the Engineering and Aerospace industries in the UK and USA. Following his PhD, he held a Research Fellowship at the University of Sussex, before joining Smith Associates in 1983, where he developed digital imaging technologies for television.

He joined the Systems Group at PA Consulting, becoming Director of the Computing and Telecommunications business in Europe. He left PA in 1987 to become a founder-Director of the Generics Group, a Cambridge-based high-technology company that develops innovative products and services for a wide range of international companies. After leaving Generics in 1995, he briefly managed a boutique media strategy business in London, before setting up Cartezia.

Uday's practical experience of the difficulties inherent in building new businesses in the emerging digital marketplace prompted him to create Cartezia.
Uday is now based in Cambridge, UK.

About Natasa Milic-Frayling
Natasa Milic-Frayling joined Microsoft Research Cambridge, UK in 1998. She has been setting research directions for the Integrated Systems group. Her interests include design and evaluation of information retrieval systems, machine learning methods for text, user centred design of information management systems, and technologies for cross-platform and context rich communication.

Since October 2004, Natasa has been heading the Research Partnership Programme that facilitates collaboration between researchers and Microsoft teams in MS Subsidiaries across Europe, Middle East, and Africa (EMEA).

Natasa obtained her B.S. in Applied Mathematics from University of Zagreb, Croatia in 1984 and Ph.D. in Applied Mathematics from Carnegie Mellon University, Pittsburgh, PA in 1988. Prior to joining Microsoft Research, she worked at Claritech Corporation (currently Clairvoyance Corporation), a spin-off company from Carnegie-Mellon University, producing software components for building information management systems. With the acquisition of Claritech by the Justsystem of Japan, Natasa assumed the role of the Director of Research.