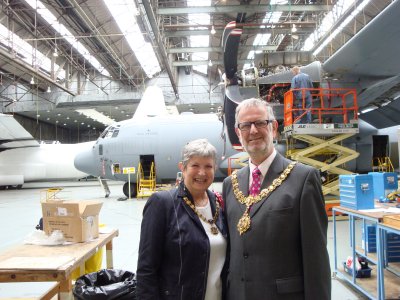 Councillor Mike Dixon, accompanied by the Lady Mayoress, his wife Anne, visited Marshall of Cambridge last week. During his visit the Mayor flew over Cambridge in a Cessna 172 training aircraft of the Cambridge Aero Club with the Group Support Executive, Terry Holloway.

This annual flight over Cambridge by the Mayor commemorates the fact that the first civil flight in the United Kingdom - following the relaxation of the Civil Flying Regulations after the Second World War - took place on 1 January 1946 when the then Mayor of the City of Cambridge flew from Cambridge Airport in a Tiger Moth piloted by the then Chief Pilot, Leslie Worsdell.

Councillor Mike Dixon said: “It was an enormous pleasure to see Cambridge from the air and to note how much green space there is within the City environment. The Colleges and the historic City Centre looked absolutely stunning.” The Mayoress watched the Mayor’s flight from a vantage point high in the Air Traffic Control Tower of Cambridge Airport.

The Mayor and Mayoress (pictured) also toured the Marshall Aerospace manufacturing site and aircraft hangars and was briefed on the Company’s activities by Mr Michael Marshall, Chairman and Chief Executive of Marshall of Cambridge (Holdings) Ltd.