Marshall of Cambridge raises the flag on its centenary 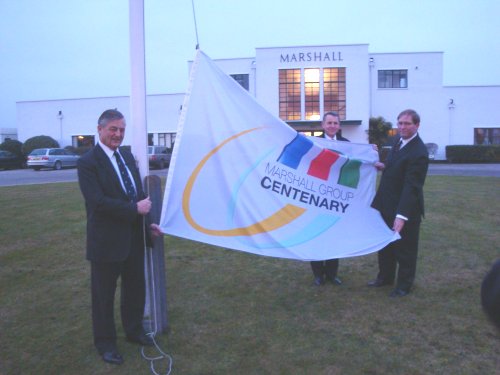 Marshall of Cambridge, the region’s most successful privately owned family company and one of the largest engineering employers in the region, celebrates its centenary in 2009. To mark the start of the centenary, the Company’s new Centenary Flag has been hoisted to the top of the Company flagpole.

Present at this special event was Mr Michael Marshall, Chairman and Chief Executive of Marshall of Cambridge (Holdings) Ltd, accompanied by a number of the Company’s senior directors and managers.

Michael Marshall said: 'This is a significant milestone for the Company, of which we are all very proud. We are looking forward to hosting a number of celebratory events during 2009 with which we intend to involve our employees, our customers, members of the Marshall Family and the local community.

'My grandfather founded us with little capital and some borrowings from Barclays Bank in 1909. One of our celebratory events will be a dinner on 17 September, which is intended to raise £100,000 for the Prince’s Trust to provide similar opportunities today for young people to make a start in business.'

Photo caption: With Michael Marshall (left) is Grahame Nix, Chief Operating Officer of Marshall Aerospace , who was awarded the OBE in The New Years honours list, and Christopher Walkinshaw of The Marshall Motor Group.

The Group of Companies is chaired by the third generation of the Marshall family, and employs members of the fourth generation. The Group currently has an employment of over 3,700 working in the fields of aerospace engineering; design and manufacture of specialist vehicle applications, military mobility shelters and hospital surgical units; motor vehicle sales and after sales support; refrigerated transport sales and support; and property ownership and management.

Further details of Marshall of Cambridge can be found at www.marshallgroup.co.uk