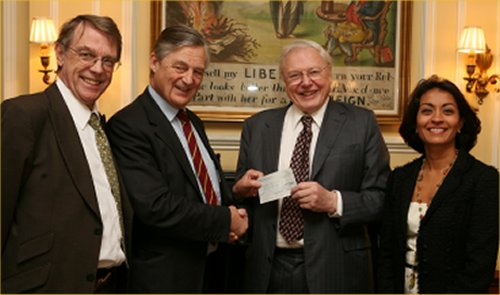 Marshall of Cambridge has spearheaded the inspirational Cambridge Rainforest Appeal that has raised £200,000 to enable conservation charity, the World Land Trust to fund the purchase of a key wildlife corridor in Borneo. The land purchase is expected to secure the future of 604 Orang-utans, a critically endangered species.

The World Land Trust launched the Borneo project last August when Marshall of Cambridge funded a feasibility study that enabled WLT to deploy their Projects Manager to the Malaysian island. The WLT soon discovered that a project needed to be established urgently to protect a vital corridor of forest between two separated areas of the Lower Kinabatangan Wildlife Sanctuary. By protecting the corridor and forming a continuous reserve area it would be possible to ensure the survival of a large population of Orang-utans which would otherwise be threatened with extinction.

It was apparent that WLT had identified a golden opportunity to help save the much loved Orang-utan, but it was an opportunity with an expiry date. It was imperative that £343,364 was raised by January 2009.

Following the feasibility study and the recommendation Marshall of Cambridge rose to the challenge of raising significant funding from among the Cambridge business community. They formed the Cambridge Rainforest Appeal to engage local support and generously hosted a fundraising evening at their Cambridge Airport Headquarters. Despite the credit crunch the response has been overwhelming with £200,000 being donated to their appeal before the January deadline which has therefore made the land purchase possible.

It is certainly reassuring that during a time when businesses are reconsidering their priorities for the difficult time ahead, business leaders are standing firm on green and conservation policies, something which has never happened in previous economic down turns.

The Orang-utan’s main threats come from the massive conversion from tropical forest to oil palm plantation. Because of the huge profits to be made from palm oil, the land is much more expensive than the Trust usually has to pay.

However, according to John Burton, WLT CEO, there may be a positive aspect for endangered species resulting from the credit crunch: " Over recent years land prices throughout the world have soared but with the financial crisis we may see a fall in prices meaning that the funds we raise could go a lot further. Saving critically threatened habitats while we can is absolutely vital ~ unlike money, we cannot just borrow more wilderness; once it’s gone its gone - there is no way of bailing out rainforests!"

And Patron of the World Land Trust, wildlife pioneer, Sir David Attenborough, agrees saying, “Every bit of rainforest that is lost in Borneo is less space for Orang-utans to survive. I urge everyone to give generously to this appeal which really is on track to secure a future for Orang-utans in the region”.

When handing over the cheque to Sir David, Michael Marshall said, “ I am proud to be associated with such an important Appeal on behalf of the World’s biodiversity and, at the same time contributing so significantly to the avoidance of carbon emissions which the burning of the forests would cause. This is a double win!”

In 2009 Marshall of Cambridge and the World Land Trust will be working together to further highlight the plight of the Orang-utan and strive to purchase other vitally important areas of forest habitat indentified in the feasibility study. There is still a great amount of work to be done if we are to make a serious impact on the future of mans closest relative.