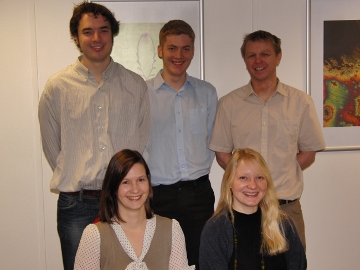 The picture shows: standing (from L to R): Chris Walters, Simon Jelley and Mark Mellors who are joining into newly-created engineering roles, following a spate of major new business wins by the consultancy over the last few months. And in front are Sue Smith who has been been appointed as finance manager to the consultancy and Rachael Hoyle as office manager.

“We are delighted to be adding five new names to our expanding team and are taking a positive outlook for our prospects this year. Clients are increasingly attracted by 42T’s cost-effective, efficient business model where we combine our own in-house expertise with specific skills drawn from associates and partner companies. This approach gives ever client access to the optimum team, guided by senior project managers and experienced implementers, while keeping their new product development costs down,” said Howard Biddle, managing director of 42T.

Simon Jelley and Mark Mellors are both coming on board to provide mechanical engineering input to a range of client projects. Simon has previously worked on production line optimisation with Newton Industrial Consultants and has also gained considerable field engineering experience from his passion for car rallying. In 2007 he took part in a 7,800 mile charity rally from London to Mongolia - in a 1 litre 22 year old car - which he completed in under a month to raise over £2,000 and amassing a number of hair-raising anecdotes.

Mark was previously with GKN Aerospace developing novel systems for wing de-icing and Carbon Concepts, a composites development company and in his spare time is an enthusiastic and accomplished inventor. His recent achievements include designing a robotic unicycle, a hydrofoil windsurfer and appearing as a competitor on Channel 4’s ‘Scrapheap Challenge’.

Chris Walters is joining from Sagentia as a technology consultant specialising in physics as well as being actively involved in leading a number of 42T’s multi-disciplinary projects. Before moving into industry Chris taught physics in the Far East.

As office manager, Rachael Hoyle will take charge of all HR and recruitment for the enlarged team as well as ensuring 42T’s office is running smoothly in handling its increased workload. Rachael was previously with the HR department at Sealed Air in St Neots where she helped develop and implement an award-winning new employee induction programme across Europe.

Sue Smith is 42T’s new finance manager and has previously held similar roles for a software consultancy, Silvaco Data Systems and in an accountancy practice. She is a fellow of the Association of Chartered Certified Accountants; swims and teaches swimming in her spare time and is teaming up with her new colleague Rachael to do this year’s 26 mile Playtex Moonwalk in London.