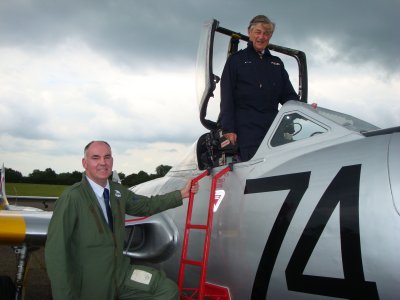 Following the recent AGM of Marshall of Cambridge, Chief Executive Michael Marshall was treated to a surprise flight in a de Havilland Vampire historic aircraft, the type of aeroplane he flew as a National Service Pilot with the Royal Air Force in 1952.

Cambridge’s first airport at Fen Ditton, was opened by Marshall of Cambridge on 9 June 1929, and to celebrate the 80th Anniversary, the Company’s Annual General Meeting was combined with the Business and General Aviation Day (BGAD) Aviation Exhibition at Marshall Airport Cambridge on 9 June 2009.

A small flying display was arranged following the Company’s Annual General Meeting for the benefit of members of the Marshall Family, employees and visitors to the Airfield for BGAD. Following lunch Michael Marshall was treated to a surprise flight in a de Havilland Vampire historic aircraft, the type of aeroplane he flew as a National Service Pilot with the Royal Air Force in 1952!

Having gained his Private Pilot’s Licence in 1949, Michael Marshall joined the Royal Air Force and began his Royal Air Force Pilot training at Gimbley in Canada on 9 April 1951 flying Harvard Aircraft. He subsequently returned to the United Kingdom in April 1952 where he was based at RAF Valley in Anglesey. On 10 April 1952 he had his first flight in a Vampire 5 Single-seat fighter aircraft and continued flying the Vampire until 1953. He made his last Vampire flight on 27 April 1953.

On 9 June Michael flew in a privately owned Vampire T11 Aircraft owned by Mark Hootons, based at North Weald in Essex. The news of the flight was kept secret from Michael until minutes before the flight.

Michael Marshall said: ‘I was really thrilled to take the controls of the Vampire and fly the aircraft to North Weald. It brought back very many happy memories of the true delight of Vampire flying, and I was very grateful to have had this very special and unique experience.’

Michael was flown in the Vampire by the aircraft’s owner Mark Hootons, pictured (above right, standing on the ground), with Michael Marshall following their arrival at North Weald.

Image: Michael Marshall flying in one of two Tiger Moths over Cambridge. Michael is in G-AEOI and his son Robert is flying in formation in the other aeroplane.

Michael Marshall gained his Private Pilot Licence on a Tiger Moth aircraft on 30 March 1949 when he was required to fly four figures of eight at 2,000ft. During a special commemorative flight on 30 March 2009 he was accompanied by Ian Glenn, the Chief Flying Instructor of the Cambridge Flying Group, when he replicated the earlier flight test conducted sixty years earlier. Ian Glenn said: ‘Michael flew a perfect series of figure of eight as well as two perfect circuits and landings.’ Michael Marshall regularly uses his pilot’s licence to fly his Rallye Minerva aeroplane.

Michael Marshall said: “I have been very lucky to have enjoyed 60 continuous years of flying which have ‘passed in a flash’. I am delighted that the dH82 Tiger Moth aircraft in which I first learned to fly are still operational at this airfield”.

2009 is the Centenary of the founding of Marshall of Cambridge in the motor business on 1 October 2009. It is also the 80th Anniversary of the Company’s entry into aviation. The Company’s first airfield at Fen Ditton was opened on 9 June 1929.

After gaining his Private Pilot’s Licence in 1949 at the minimum age of 17, Mr Marshall joined the RAF as a National Service Pilot in 1950, doing his training at Gimbley in Canada. He subsequently served at RAF Feltwell in Norfolk and RAF Valley where he flew de Havilland, Vampire and Meteor aircraft. Following his university education at Jesus College Cambridge, Michael Marshall joined Marshall of Cambridge in 1955 and took over as Chief Executive of the Group of Companies in 1989 on the retirement of his father, the late Sir Arthur Marshall

Marshall holds the distinction of operating the oldest airfield in the country, from which Tiger Moths have been operated on a continuous basis. The Tiger Moth first arrived at Cambridge Airport on 26 January 1938 and over 300 were operated by Marshall during the Second World War as training aircraft. The Company trained over 20,000 RAF pilots.