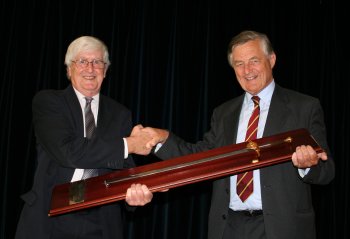 The Marshall Airport Cambridge has been awarded the highly prestigious AOPA Sword. The Aerodrome has been judged an outstanding place to visit offering value for money and helpful service.

The sword was presented to Mr Michael Marshall, Chairman and Chief Executive of Marshall Holdings Ltd  (pictured right) at a ceremony at Cambridge Airport yesterday (27 August). The presentation was made by George Done, Chairman of AOPA, accompanied by Martin Robinson, Chief Executive of AOPA in the United Kingdom.

Michael Marshall said: ‘We are honoured and delighted to have been awarded this sword in 2009, which is the centenary year of the company and also the 80th anniversary of our entry into Aviation. Our aim is to provide outstanding service to our customers throughout all the many businesses within Marshall and I am delighted that the diligent efforts of our employees at the airport have been recognised in this way’.

George Done, Chairman of AOPA said, ‘Many regional airports are now unwelcoming of general aviation aircraft, but Cambridge is unique in that it handles a large amount of General Aviation activity, alongside significant larger aircraft, which includes TriStars, C130 aircraft and other large passenger aircraft being flown in for engineering work by Marshall Aerospace. Marshall Airport Cambridge really deserves this award for being so consistent over a number of years in continuing to offer multi-use operations and for providing such outstanding service’.

Previous winners of the AOPA Best Aerodrome Award include Dundee and Birmingham. Marshall of Cambridge was a previous award winner in 1990.

AOPA – the Aircraft Owners and Pilots Association – has over four hundred thousand members worldwide and plays a prominent part in supporting the goals and aims of General Aviation aircraft. Marshall Airport Cambridge is one of the best equipped regional airports, supporting General Aviation in the United Kingdom. The present airport was opened on 8 October 1938, by Sir Kingsley Wood, by the then Air Minister. Marshall’s first aerodrome – Fen Ditton – was opened on 9 June 1929.

Marshall recently made a significant investment of £4.7M in the construction of the Marshall Business Aviation Centre – a new executive passenger handling centre and corporate aircraft maintenance handling facility which has resulted in Marshall Airport Cambridge becoming regarded as the United Kingdom’s leading executive airports.