Airport Director gets around and about 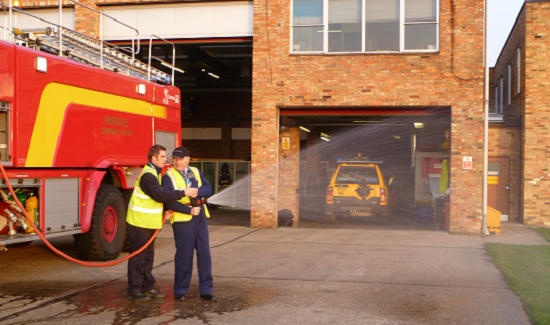 Cambridge Airport’s Director, Archie Garden, has been getting around all departments of the Airport, spending a day working in each location to learn a little more about the detailed operations of the Airport. In the past fortnight Archie has spent a day with the aircraft refuellers and another day with the airport fire-fighter﻿s.

Archie said: “Both days were highly informative and I very much enjoyed my day with the workers.  There were a number of activities which I was particularly interested to learn about, and this included the detailed arrangements for bird control on the airfield, as well as discovering just how much safeguarding and quality goes into the whole process of aviation fuel quality and refuelling aircraft.

"Most of us take it for granted that the fuel that goes into the aircraft is fit for flight but few of us appreciate just how much effort goes into ensuring that this is the case. The re-fuellers and firemen are the real unsung heroes of every airport, and it was really good to spend some quality time with them”

Cambridge Airport primarily targets the east of England market with a strong focus on Cambridge and its business, academic and industrial sectors. The airport is ideally positioned for easy access to the City of London with just under an hour’s the drive to Canary Wharf and the East of London the location of the key Olympics venues. With a 1965m/6447ft runway accepting aircraft up to Boeing 757 or Airbus 320 it is suitable for intercontinental business jets as well as small cabin aircraft. It boasts CAA Category 7 Fire & Air Traffic Control status and has full navigational aids and communications, which include radar approach coverage up to 30nm. It has invested in a new GPS approach to complement its ILS system.