Cambridge Airport takes off with inaugural flight to Jersey 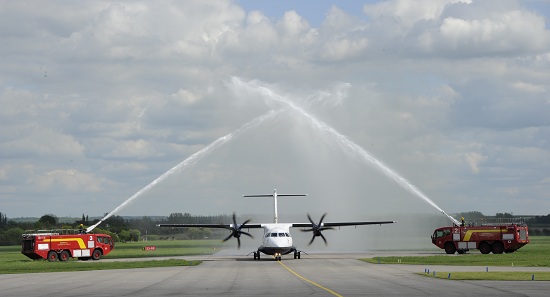 Cambridge Airport is set to welcome local passengers and international travellers alike this weekend, with the first of a brand new range of scheduled airline and holiday flights touching down as the Airport embraces its role as gateway to Cambridge, to London and the East of Englan﻿d.

The inaugural one-hour flight from Jersey will touch down at Cambridge Airport tomorrow (Saturday 12 May) with passengers travelling aboard the first of a new regular Blue Islands flight - the major regional airline of the Channel Islands - operated in conjunction with tour operator CI Travel.

The weekly direct return flights will operate every Saturday over the summer season, until 15 September 2012, by highly fuel-efficient and economical 48-seat ATR42-500 turboprop aircraft.  This is a resumption of flights to Jersey, which have operated from Cambridge as long ago as the 1950s but now return with a new lease of life, reconnecting the region to one of the most popular island destinations in Europe.

“Many local people will have very fond memories of holidays in Jersey from Cambridge and we are delighted to see the re-commencement of this popular route.  Not more than about 30-45 minutes in the terminal at Cambridge, both arriving and departing, is a remarkable contrast to the time spent in the terminals of much bigger airports. We have all read the horror stories of long delays at major airports featured recently on international news, and I can tell you there is nothing better than using a local regional airport.  It’s the nicest way to arrive in the UK, from overseas or the Channel Islands.  We will be welcoming all our passengers this summer here at Cambridge.”

As Cambridge Airport enters a new phase of development, there are plans to gradually expand its European short-haul operations with new routes to popular and niche destinations, including a new and unique scheduled airline route to Dole-Jura near Dijon in France starting on 2 July, providing access to the acclaimed wine-making regions of Franche-Comté and Burgundy.  Ideally located only three miles from the centre of Cambridge, the airport will offer international travellers direct access to London by rail in just 45-minutes and provides a gateway to the East of England.

Cambridge Airport primarily targets the east of England market with a strong focus on Cambridge and its business, academic and industrial sectors. The airport is ideally positioned for easy access to London with just under an hour’s drive to Canary Wharf and East of London the location of the key Olympics venues.  With a 1965m/6447ft runway accepting aircraft up to Boeing 757 or Airbus 320 and all regional jet types, it is suitable for short to medium haul passenger airline services.  It boasts CAA Category 7 Fire & Air Traffic Control status and has full navigational aids and communications, which include radar approach coverage up to 30nm.  It has invested in a new GPS approach to complement its ILS system.