100-year-old takes to the skies for the first time 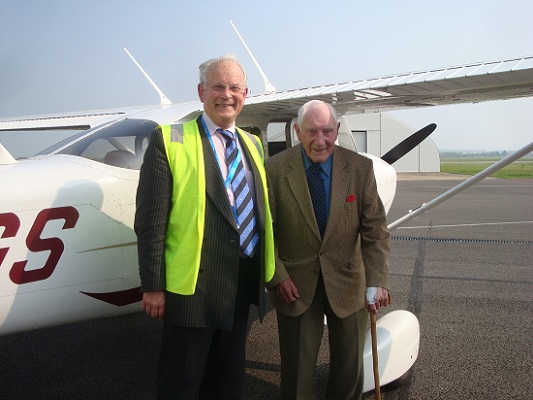 Most people gain their first experience of flight at a relatively young age, but for John Archer of Thurlow a first flight in an aeroplane was just an exciting way of celebrating his 100th Birthday!

John, who will celebrate his 100th Birthday on 16 June, has always wanted to see his native village Thurlow from the air and this dream was realised last week when he flew with Terry Holloway, Deputy Chairman of Cambridge Airport in a Cessna 172 of the Cambridge Aero Club.

Terry Holloway said, “Marshall of Cambridge entered aviation in 1929 when we began teaching people to fly from our first airfield on the edge of Cambridge.  John was just 17 years old at the time.  Although our Aero Club does not have any definitive records, we are quite certain that John is the oldest person ever to fly in one of our aeroplanes, and we believe it is unlikely that few people of his age, or older have flown in an aeroplane for the first time!  I live in the neighbouring village to John and I very much enjoyed helping him to realise this particular ambition.”

John’s grandson, Andrew Ketteringham, works at Marshall Aerospace as an Aircraft Fitter and was there to watch his grandfather take his flight.

Cambridge Airport is part of the Marshall Group of Companies, a private family business, owned and managed by the Marshall family. The business was founded in Cambridge in 1909, and entered aviation in 1929. Marshall Group activities which take place at the airport include Marshall Aerospace (engineering and technology), Marshall Executive Aviation (Jet Charter and management) and Cambridge Aeroclub (GA Training and Maintenance).

Cambridge Airport primarily targets the east of England market with a strong focus on Cambridge and its business, academic and industrial sectors. It is also a strong provider to the equine community as it is just 10 miles from Newmarket and offers regular services for the transportation of horses.

The airport is ideally positioned for easy access to London with just under an hour’s drive to Canary Wharf and East of London the location of the key Olympics venues.

Founded in 1909 with little capital as a chauffeur drive company in Cambridge, Marshall moved into the retail motor business in 1910, obtained Distributorship for Cambridgeshire in 1920 and entered the aviation business in 1929.  With all its growth funded by ploughed-back profits, the Marshall Group remains a privately owned family Company, with a turnover of over the Austin £1bn per annum.  The Group of Companies is chaired by the third generation of the Marshall family, and employs members of the fourth generation.  The Group currently employs just over 4,000 people working in the fields of aerospace engineering; design and manufacture of specialist vehicle applications, military mobility shelters and hospital surgical units; motor vehicle sales and after sales support; refrigerated transport sales and support; and property ownership and management.   (www.marshallgroup.co.uk)