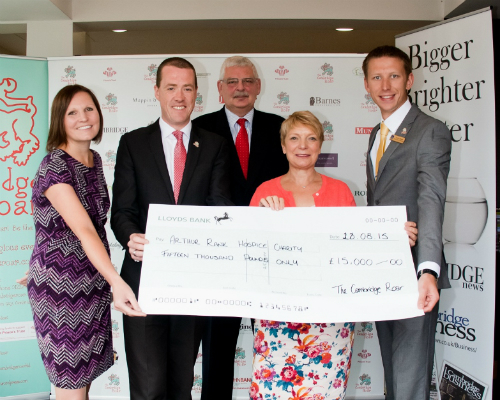 Arthur Rank Hospice Charity was delighted to visit Quy Mill Hotel & Spa this week to receive a £15,000 cheque from The Cambridge Roar 2015.

The staggering total was raised by a spectacular festival of 18 events stretching across 23 days in June at the Quy Mill Spa and Hotel. On presenting the £15,000 cheque to the Charity, Chairman of The Cambridge Roar, Tony Murdock, revealed that the hotel will be partnering with the Cambridge Live Trust with support from the Cambridge News, to host a further two Cambridge Roar events to benefit the Charity this September.

The Bootleg Beatles will play live on Friday 25 September, followed by the Roar Comedy Gala on Saturday 26 September featuring Russell Kane, Marcus Brigstocke and Rich Hall. These two exciting events will coincide with the Cambridgeshire Chamber of Commerce B2B exhibition and Cambridge News Wedding Fair, previously announced for the Thursday and Sunday respectively.

Now in its second year, The Cambridge Roar was created by Tony Murdock, Chairman of Cambridge Roar and General Manager of the Quy Mill Hotel & Spa. Tony had the vision of organising a festival to encompass all different walks of Cambridge life, whilst showcasing local businesses and raising money for charity. The Arthur Rank Hospice Charity, as one of the two chosen charities, was delighted to be involved, even launching Arthur Bear – the charity’s brand new cuddly mascot - at the Father’s Day Celebration event.

The Cambridge Quy Mill Hotel & Spa has already proved itself a multi-faceted venue and for the summer festival hosted a huge array of activities which ranged from a Sporting Heroes Dinner to a B2B Exhibition, The Grand Wedding Fair to a White Collar Boxing event, Frozen Sing-a-long to Roary’s Continental Market, Wimbledon Warm Up to The Watering Hole Beer Festival. The June events were rounded off with The Cambridge Roar’s Grand Hollywood Finale Ball, with 260 guests attending the glittering black tie evening on Saturday 11th July.

Tony Murdock explains: “The idea was that there would be something for every member of the family and that, together, the 18 events would make a Roar of Pride for the work being done right here in Cambridgeshire. It was such a roaring (!) success, that we have great pleasure in announcing the addition of more events to the portfolio for this autumn and we are really looking forward to working with Cambridge Live, with support from Cambridge News, to raise further funds for the Arthur Rank Hospice Charity.”

The £15,000 raised for the Charity so far will be channelled towards the ‘Help Our Hospice’ campaign and hopes are high that this amount will continue to grow to further support the new hospice building which is taking shape at Shelford Bottom

Donna Talbot, Director of Fundraising and Communications at the hospice adds: “We couldn’t quite believe it when Tony told us they had more events in the pipeline and we have no doubt that they will be as successful as those in which we participated earlier in the year. The amount raised over the summer is testament to the dedication, determination and unrelenting energy that Tony and The Cambridge Roar team exude and we are so proud to be involved. We would like to also take this opportunity to thank the many businesses who have and continue to support the Roar venture and to the thousands of guests who purchased tickets during this festival of fun and will hopefully do so again for the fantastic September events.”

Tickets for the Bootleg Beatles are £20 per person and those for the Roar Comedy Gala are £25 per person, with VIP packages available. They can be purchased now through the Cambridge Live website: www.cambridgelivetrust.co.uk/tickets or by calling: 01223 357851.

If you would like to look back at some of the superb June events, please visit thecambridgeroar.co.uk or Arthur Rank Hospice Charity’s Facebook photo album pages. If you would like to be part of the fun as a guest, contributor or sponsor, please call the hospice on 01223 723115.