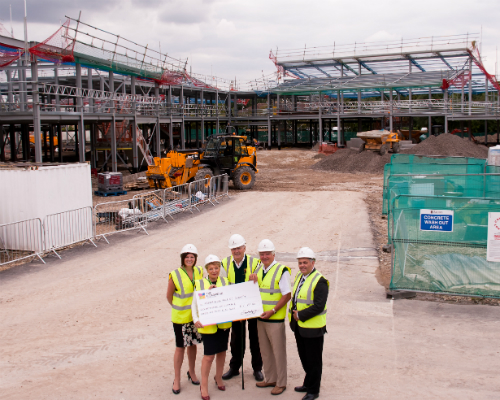 Arthur Rank Hospice Charity was thrilled to accept a cheque last week from the Gog Magog Golf Club’s Charity Golf Day, after the organisers revealed that the fundraising grand total had reached £11,191.50.

Organisers John Hodgson and his brother Dalby, a Senior Marshal at the club, together with Golf Club Secretary Manager Kevin Made,  presented the cheque at the hospice’s new Shelford Bottom site which is currently under construction directly opposite the Gog Magog course.

Receiving the cheque, alongside the Charity’s Chief Executive, Dr Lynn Morgan, Donna Talbot, Director of Fundraising and Communications, said: “It’s has been wonderful to have the support of John, Dalby and the Gog Magog Golf course over the years and astounding that they have now raised over £46,000 for us! As you can see from the photo, our new hospice is really starting to take shape and we are excited that the by the time the 2017 Gog Magog Golf Day comes around, we will be providing our vital care and services from the purpose built building, situated in green and leafy surroundings right opposite the course. We hope our relationship with the Club will continue to grow as Arthur Rank Hospice becomes an integral part of the community in Shelford Bottom.”

The Charity would like to thank John and Dalby Hodgson for their impressive efforts in organising the day, Kevin Mader and the team at the Gog Magog Golf Course for hosting, along with all the teams and sponsors – especially headline sponsors Solopark and Buckingham & Stanley Group - who were involved on the bi-annual event on Friday 26 June 2015.