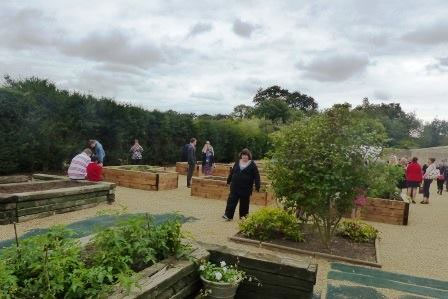 The transformation of an abandoned acre of the grounds at Thorpe Hall has been marked with the official opening of the Hospice’s new kitchen garden on 16 September 2015.

Three months after work began, the patch of weed-strewn land is unrecognisable thanks to hundreds of hours of effort by volunteers under the leadership of a dedicated team from British Sugar.

The kitchen garden, in the walled space many local people remember as being home to a volunteer-led garden centre, now boasts raised beds, a polytunnel, a flower border, seating areas and a children’s area, designed by Headway Cambridgeshire’s horticulturalist Simon Lacey and project manager at British Sugar Paul Fisher.

The joint initiative between the teams from Thorpe Hall Hospice and Headway Cambridgeshire, which is also based at the hospice in Longthorpe, Peterborough, has been backed by a number of businesses which have provided material, equipment, landscaping and expertise.

Ongoing planting, harvesting and gardening will be carried out by members of Thorpe Hall’s day services and clients of Headway Cambridgeshire as part of the holistic care both organisations offer. Their efforts will be supported by the team from British Sugar, which has pledged to provide volunteers on a regular basis as well as ongoing project management.

The produce grown will be used in the hospice’s kitchen with a longer term plan to open a Thorpe Hall farm shop.

Amy Zdravkovic, from British Sugar, said the results were amazing thanks to the hard work of all the volunteers.

She added: “We had more than 160 volunteers take part in the project and everyone is very proud of what has been achieved, transforming an unused patch of land into an accessible garden that patients, their families and visitors can enjoy.”

Hospice director Jane Petit spearheaded the plan to reintroduce a kitchen garden at Thorpe Hall. She said: “The garden is the perfect example of a sustainable project in which businesses can work alongside charities to benefit hundreds of people from across the community.”

Supporters of Headway Cambridgeshire also helped in the development of the garden, which has been carefully designed to be fully accessible. Headway Cambridgeshire’s Peterborough-based clients are very much looking forward to developing their horticultural skills and have lots of plans for the future.