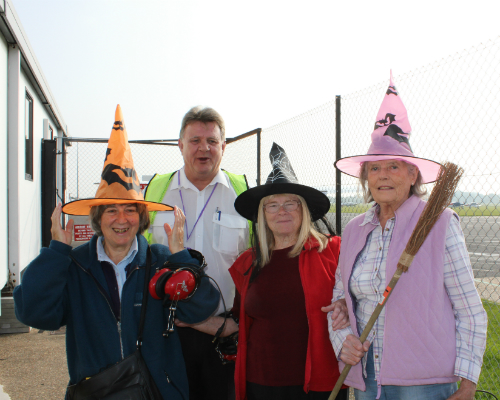 Ladies take to the skies after winning a raffle raising funds for the Arthur Rank Hospice Charity.

Three ladies in witch’s hats have flown over Cambridge after a lucky ticket was drawn at charity walk Bridge the Gap, for a sky-high raffle which has now raised £850 for the Arthur Rank Hospice Charity. The thirty minute ‘Wings of Time’ flight in a Pierre Robin DR400 was donated by Cllr Paul Bullen, a qualified pilot, in order to raise money for the Charity in memory of his friend and fellow Councillor Lister Wilson who received the Hospice’s care earlier this year.

Caryl Coomer was delighted to hear her winning ticket had been drawn, after taking part in the Bridge the Gap walk around Cambridge’s colleges on 13th September. Her friends Rosemary Cluff and Helen Strain joined her for the special flight. The three friends already have a close relationship with and understanding of charity and palliative care: Caryl is a volunteer community driver, Rosemary is a volunteer gardener for a children’s hospice and Helen recently nursed her late husband who suffered from Parkinson’s disease.

Mrs Coomer said: “Despite some intermittent cloud which forced us to change our planned flight path, we all had a wonderful time. We would like to say a huge thank you to Cllr Bullen for offering this prize: he was so considerate to our needs and allowed Helen’s son, daughter-in-law and their children to join in the fun with the boys thrilled to sit in the pilot’s seat as an extra treat. It was a lovely day.”

The total raised by Bridge the Gap - which will be split evenly between Press Relief and the Arthur Rank Hospice Charity - have now reached £31,000 and the ‘Wings of Time’ flight raffle adds to this impressive figure.

Donna Talbot, Director of Fundraising and Communications at the Arthur Rank Hospice Charity, comments: “We loved seeing the photos of Mrs Coomer and her friends in their witches’ hats’ enjoying this special prize so kindly donated by Cllr Bullen with the support of the Lister Wilson family, and we are thrilled the raffle raised another £850 for the charity. Creative and generous community fundraising such as this enable the Hospice to continue to raise the £2 million a year it costs to provide essential end of life care, counselling and support services for patients and their loved ones in Cambridgeshire.”