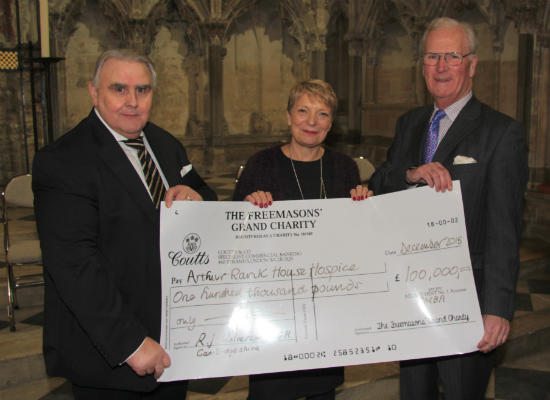 CEO Lynn Morgan was delighted to receive a further donation from the Cambridgeshire Freemasons at a special event in the Lady Chapel, Ely Cathedral.

Last month, Lynn Morgan, Chief Executive of the Arthur Rank Hospice Charity, was delighted to be invited to Ely Cathedral for a special evening hosted by the Cambridgeshire Freemasons. The dinner in the Lady Chapel was held to mark the retirement on 8 December of Rodney Wolverson after 10 years as the Provincial Grand Master of Cambridgeshire. At the conclusion of this period Rodney was very pleased to be able to present the Hospice with a cheque for £100,000 as a further contribution to their Building Fund Appeal.

This donation is one of three substantial donations which have been received less than 18 months since Rodney Wolverson challenged Cambridgeshire Freemasons to raise a substantial six figure sum in aid of the New Hospice Appeal. An earlier donation of £100,000 was made at a formal dinner hosted at Queens’ College on 17 June 2015 with a subsequent cheque presented at the site of the new hospice during the Act of Dedication for £15,000 shortly after on 29 June.

Lynn Morgan, Chief Executive of Arthur Rank Hospice Charity, said “The Cambridgeshire Freemasons really are unsung heroes. We are overwhelmed by their generosity and we would like to thank every single person who has made a contribution or attended one of the many, many events which have been organised in a bid to raise this terrific sum.”

Rodney Wolverson comments: “All Freemasons in Cambridgeshire have identified with the building of the new Hospice and we have continued to organise many events in 2015 to raise funds. We were delighted to be present at the Act of Dedication when we were able to present a cheque for the sum raised at the Festival of Carols. With this second donation of £100,000 we have contributed in total £215,000 to an Appeal which has really caught the imagination of Freemasons throughout Cambridgeshire.”

A whole array of activities have taken place to enable this target to be reached. The Festival of Carols in Ely Cathedral raised £15,000 in December 2014 and Freemasons and their individual lodges have hosted numerous events for friends and families ranging from Summer Balls, Pantomimes and Garden Parties. It is this united approach that has led to such a generous figure being raised.

This latest donation comes at a time which sees the building become watertight ahead of the Christmas break, further signifying a substantial milestone for the Charity and subsequently takes the appeal to £7.1 million leaving £3.4 million still needed to complete the project. The new hospice which is located at Shelford Bottom is expected to open to receive patients in late 2016.