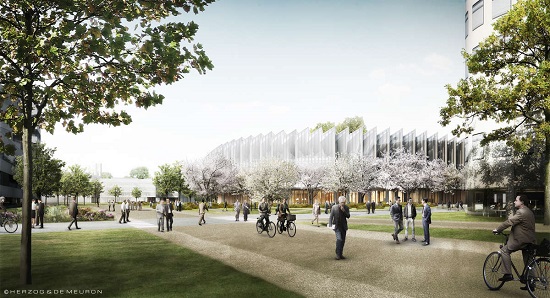 AstraZeneca and MedImmune, the global biologics research and development arm of AstraZeneca, this week inaugurated “Science in pictures”, an artwork installation on the hoardings around the construction site of their new Research and Development Centre and Corporate Headquarters on the Cambridge Biomedical Campus.

This new state of the art R&D headquarter facility in Cambridge will bring together small molecule and biologics research and development. It is designed to encourage collaborative working across the organisation as well with the wider scientific community through its open design and ‘campus’ environment.

This project is part of AstraZeneca’s science, technology, engineering and math (STEM) outreach programme in the local Cambridge community. Following workshops led by AstraZeneca and MedImmune scientists and local artists, students were invited to create a circular picture that captures what science means to them. These workshops, which took place in the summer of 2015 at the University Technical College and the Cambridge Science Centre, provided insight into the science behind new medicines and how potential medicines are identified and developed.

Dr Jane Osbourn, Vice President of R&D, MedImmune, said: “We are committed to sharing our passion for science by supporting science-based educational events for young people. The science in pictures workshops introduced students to the kind of research biopharmaceutical companies undertake and the breakthroughs that are possible for the treatment of the world’s most complex diseases.”

Dr Menelas Pangalos, Executive Vice President, AstraZeneca** added: “The circular artwork that the students produced captures the visual world of discovery science and will provide a creative enhancement to the hoardings around the new Cambridge Biomedical Campus site. We would like to thank STEM Team East, Cambridge Science Centre and all of the schools for their engagement in this project.”

Commenting on progress with the construction of the R&D Centre and Corporate Headquarters, Dr Pangalos said: “Our new home in Cambridge will enable us to play a greater role in delivering the next generation of medicines that will positively influence millions of lives. Our relocation and building are very much on target, with over 1500 employees working in the Cambridge area across six sites”.

“Science in pictures” is on display at the Cambridge Biomedical Campus now.

Dr Menelas Pangalos, Executive Vice-President of AstraZeneca, will be the key speaker at a Cambridge Network event on Monday (January 18th), held jointly with Cambridge Society for the Application of Research (CSAR) and the Cambridge Philosophical Society.