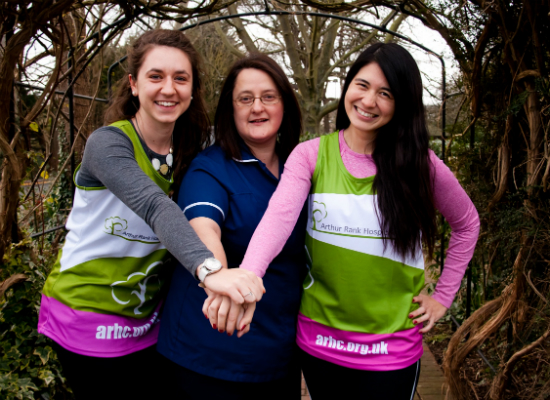 Arthur Rank Hospice’s Inpatient Unit Manager, a Counselling Psychologist and its Central Referrals Officer are ready to run 13.1 miles on Sunday (Feb 28th), alongside scores of others from Team ARHC.

Three members of Arthur Rank Hospice’s front-line team will make up a team of over 60, who will be donning their trainers to run Cambridge’s Half Marathon this weekend. Carly Love (Inpatient Unit Manager), Lisa Dvorjetz (Counselling Psychologist) and Anna Riglin (Central Referrals Officer) will be joined by GP and Trustee, Dr Alex Manning (Burwell Surgery) in a staff-team which has collectively raised £2295.

In total 7,000 participants will take on the Cambridge Half Marathon this Sunday, on a new course which winds through the centre of Cambridge passing famous landmarks including the Round Church, Kings College, Fitzwilliam Museum and The Backs. Those running for Arthur Rank Hospice Charity also include Stuart Bubb landlord of The Mitre), Kirsty Sewell from IT company Cambridge Networks (Huntingdon), a large team from Cambridge Consultants, Tony Murdock and Linden Beattie from Quy Mill Hotel & Spa, Andy Robinson (Oakington) who runs Four Wheels Motor Services in Fulbourn, Laura Emson & David Brittain of ‘Team HR for Cambridge Assessment’, Stephanie Amps from Saffron Walden, Helen Moss from Coton, a team of three (Andy, Dan and Ed) from Spirit Health Club, wedding photographer Lee Allison from Cambridge and many more! It is hoped that a grand total of at least £15,000 will be raised by those running for the Hospice this year.

Whilst Midsummer Common will be the main event hub, Arthur Rank Hospice Charity supporters, runners, families and friends are invited to join the cheering team with their banners and flags outside The Mitre on Bridge Street from 9am. Runners will pass this rendezvous point twice and the fundraising team will stay on into the afternoon (and hope the cheering squad will too!) to welcome back victorious runners with their finishers’ medals.

Kath Austin, Community Fundraiser for Arthur Rank Hospice Charity’s challenge events adds: “We are thrilled that over 60 people are taking part for Arthur Rank Hospice this year! Everyone has worked incredibly hard with their fundraising activities, including our staff team who are directly involved in the care we deliver to those living with a life-limiting illness. Please come along to The Mitre on Sunday and give those in their bright green running vests a boost …and an extra cheer if you are supporting alongside the route on the day!”

Those taking part or supporting family and friends are invited to post photos and comments on social media using #TeamARHC and/or #CambridgeHalf. You can find Arthur Rank Hospice Charity on Facebook at https://www.facebook.com/ArthurRankHospiceCharity/?ref=hl or on Twitter at https://twitter.com/ArthurRankHouse. If you are running for Arthur Rank Hospice and would like a free banner for the day please call the Fundraising Office on 01223 723186.