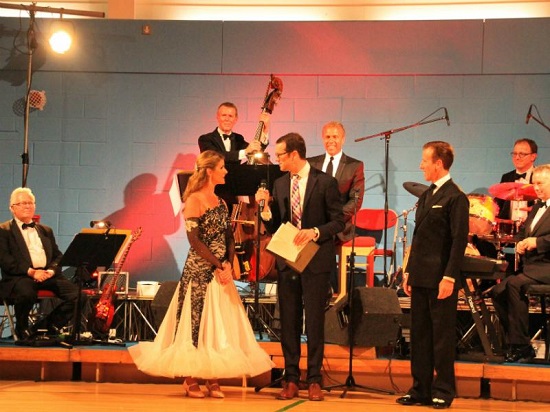 A splendid evening with the stars from Strictly Come Dancing raises in excess of £10,000 for the new home of Arthur Rank Hospice.

Over 300 people took their seats in the Fulbourn Centre, Fulbourn to enjoy a live performance by Strictly’s Erin Boag, Anton Du Beke and friends on Saturday night.

The fundraiser was instigated by the Fulbourn Centre and Fulbourn Arts in support of the Arthur Rank Hospice Charity and its £10.5 million appeal to build a new hospice. Tickets were in high demand and a conscious decision was made to ensure local Fulbourn residents had first refusal on purchase of tickets. Due to the calibre of the guests and interest, the event sold out within days.

Highlights of the evening included not only some truly memorable performances of the Viennese Waltz, Anton’s favourite dance to ‘Let’s go fly a kite’ and a Quickstep number set to ‘Lullaby of Broadway’ but also a question and answer session, which allowed the audience to pose their questions directly to Anton and Erin. Anton’s bold response to; “Do you have to wear special underwear when dancing?” was “Yes, I like to be secure, I use a special brand called ‘Clingfilm’; I can’t handle anything jigging about”.

Erin offered advice to a budding dancer, aged nine, who asked “How often to you need to practise your dancing?”. She replied: “Practise as much as you can, but ensure you enjoy it. I even train on my birthday and I have trained on Christmas day with Anton before”; which was followed by Anton’s cheeky reply: “That is the gift I give Erin: the opportunity to dance with me.”

As the evening drew to a close, the audience applauded as Donna Talbot, Director of Fundraising & Communications at Arthur Rank Hospice Charity was presented with a cheque for the astounding predicted total of £10,750, which was further bolstered by a collection of more than £300 on the evening and a kind donation of a further £27 raised from an earlier quiz night held by Fulbourn Arts.

All funds raised through the evening’s ticket sales and the charity raffle - which included prizes kindly donated by companies such as Quy Mill Hotel & Spa, CambsCuisine, Yara UK Ltd & The White Hart Fulbourn - will be directed to the new Arthur Rank Hospice, which will open late 2016. The hospice’s new home opposite the Gog Magog Golf Club in Cambridge is nearing completion and will be double the size of the existing facility at Mill Road. The new building will house a 24 bed inpatient unit, a day therapy centre, a larger education and training centre, a bistro for patient and visitor use as well as family accommodation for those family members who would like to remain close by for their loved ones.

A final cheque presentation in the next few weeks will confirm the grand total raised for the new building, from Saturday’s event. Ron Ward, who chaired the organising committee from the Fulbourn Centre and Fulbourn Arts said: “The evening was a great success. We set ourselves a target of raising at least £10,000 for this wonderful charity and that has been achieved. It has been most enjoyable and has raised a significant amount for the charity thanks to the support of many village people. It is rewarding to see the Fulbourn Centre at the centre of this showcase and it has really illustrated what a wonderful facility we have for the people of Fulbourn and nearby villages.”

Donna Talbot, adds: “We were thrilled to be invited as the beneficiary for this brilliant fundraiser. The committee which included individuals from the Fulbourn Centre and Fulbourn Arts have been just wonderful. The celebrities were naturally a real draw and the evening did not disappoint with superb performance, great humour and song. We would like to thank everyone who was involved or attended this special evening for their support and their generosity.”