Do you want to boldly go where science has not gone before? 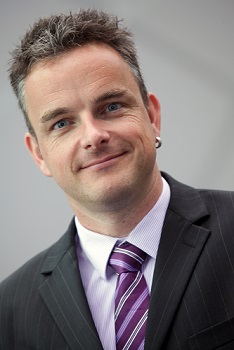 It is theorised that the Big Bang should have created equal amounts of matter and antimatter, but there is not much antimatter to be found today in comparison to matter. Professor Carsten Welsch of the Cockcroft Institute, and Head of Physics at the University of Liverpool, is organising a kick-off meeting this Thursday (12 Jan) for a new research and training network called AVA (Accelerators Validating Antimatter physics), which will be looking into this asymmetry problem.

According to current laws of physics you shouldn’t be here, as equal amounts of matter and antimatter particles should exist and destroy each other. Now partners from academia and industry are tackling the big question: does antimatter behave like matter? If not, our fundamental understanding of nature is flawed.

“At the moment we think that nature is symmetrical and that is why our current models of physics fail to explain antimatter,” says Professor Carsten P. Welsch of the Cockcroft Institute and Head of Physics at the University of Liverpool. Prof Welsch is organising the kick-off meeting 12 January 2017 for AVA (Accelerators Validating Antimatter physics), a new research and training network that is looking at the mysterious particles that are thought to mirror those in the ‘real’ world.

“We know that antimatter can exist; indeed positrons, the antimatter particle of the electron, are created and used in hospitals every day for PET scans (positron emission tomography) for cancer diagnosis,” he says.

“However, according to scientific theories, every type of matter in the universe created after the Big Bang should have been accompanied by equal amounts of antimatter (particles with the opposite charge), but this isn’t so. If we can find out why, this would have massive implications.

“At the moment all the theories assume symmetry and this creates a picture of the universe that sort of makes sense – that is until we do an experiment that proves otherwise!”

AVA has been established to take a big picture view of the challenge, to train fellows with the skills needed to design these types of experiment and the tools required to progress them.

Antimatter is difficult to investigate because when an antiparticle and a particle meet they annihilate each other, disappearing in a flash of energy, so a trapping device is needed.

A core requirement is to produce the antimatter particles in sufficient quantity and cool them so they are slow enough to study, and this is now starting to happen.

“When the new ELENA (Extra Low ENergy Antiproton ring) comes online at CERN later this year it will be the first and only facility in the world able to store and then deliver cooled antiproton beams at low energy,” explains Prof Welsch. “AVA will help to further exploit this new facility by developing the tools and techniques required to optimise low energy storage rings and control the antiproton beams they produce.”

Although potentially antimatter would provide an unprecedented source of energy, Prof Welsch says that this is not the reason why industry is taking an interest in AVA. He comments: “Antimatter imaging is now available so the next challenge for industry is particle detection. All the partners are involved in sensor technology and they are optimistic that once they have optimised the technology for antiprotons, the most exotic particles, then the instrumentation will have many other applications.”

The involvement of 13 industry partners, five universities and eight national and international research centres means that AVA offers an outstanding opportunity to train and support 15 research fellows to carry out interdisciplinary antimatter research.

Prof Welsch concludes: “The Fellows trained by AVA will be at the frontier of one of the most exciting areas of physics and will boldly go where no scientist has been before.”

Recruitment for the research fellows closes on 31 January 2017. The AVA kick-off meeting is 12-13 January 2017 in Liverpool. More information www.ava-project.eu