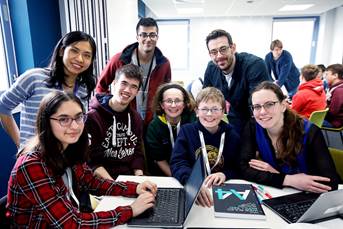 Local girls and boys with an interest in science, technology, engineering and maths (STEM) have been given an inspiring look behind the scenes at Amazon’s Cambridge Development Centre during a special skills event.

Twenty local teenagers attended the event at Amazon’s Cambridge Development Centre, where the local girls and boys worked with the Amazon and Robogals teams to build a skill for Alexa—a capability that can be controlled or interacted with via voice.

The end product of the techy teenagers’ efforts are two new skills which will be added to the Alexa service. They are a Harry Potter inspired sorting hat skill which allocates Hogwarts houses to users and a random number generator which gives a Fibonacci number when prompted. Both skills can now be accessed via Amazon’s voice-controlled speakers, Amazon Echo and Echo Dot.

Participants also got the opportunity to tour Amazon’s drone development lab in Cambridge that is developing Prime Air – a delivery system designed to safely get packages to customers in 30 minutes or less using drones.

Speaking on the event, David Hardcastle, Senior Manager at Amazon’s Cambridge Development Centre, commented: “The event has been a huge success, and it was great to host so many local teenagers with an interest in STEM. Our team really enjoyed helping the group with their coding exercises, as well as showing them some of the work we do here at Amazon Cambridge. We’ve had a lot of fun working with Robogals on this event, and look forward to inviting more of the local community to visit our Development Centre in the future.”

Jenny Sidey from Robogals added: “It was fantastic to host such an innovative event with David and his team from Amazon in Cambridge and everyone involved on the day had a great time. From giving the local boys and girls a tour of the Amazon Development Centre to helping them develop an Alexa Skill with coding classes, the event provided a great mix of educational learning and real-world experience and I hope it inspires as many local teenagers as possible to embrace a future career in STEM.”

Robogals offers interactive, engineering-based workshops for girls aged between 8-18 all around the world.

Before Saturday’s event, members of the Amazon Cambridge team visited Robogals HQ to deliver a £1,000 donation, which will be used to purchase new equipment that will help the group continue its work in the community. The donation forms part of the Amazon in the Community programme where the company supports communities in and around where it operates in the UK to help children reach their potential in the digital world.

At the Cambridge Development Centre, the Amazon team works on continually improving the knowledge systems within the Alexa voice service and on Prime Air, a delivery system designed to get packages to customers in 30 minutes or less using drones.