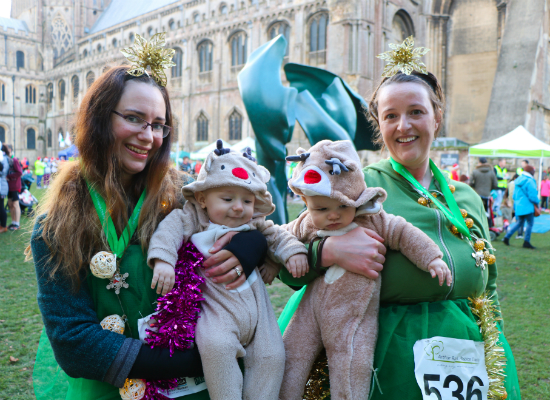 Hundreds of festive fun-runners took part in Arthur Rank Hospice’s jolly annual 5K last Sunday morning (25 November), starting and finishing in the grounds of Ely Cathedral. So far this year, Ely Festive 5K 2018 has raised £13,142.47, with funds still being sent in and collated.

Once again, there was an impressive array of outfits on show, with a team of penguins, a selection of Quality Streets, reindeers, an array of Christmas trees, a candy cane, a gentleman with a glitter-and-bauble-beard, a handful of Christmas puddings, a host of angels, and even a sleigh-like mobility scooter making their way around a new 5K route.

“It’s been really good: I liked the route this year, with the two loops of the park. The marshals were amazing and the atmosphere was really good, with loads of brilliant outfits on the route. We overtook the penguins and then they overtook us and there was a lot of little elves that were very cute! The kids really loved it too. I’ve been raising money for Arthur Rank Hospice for a few years now and they helped Grandad.”

Patricia adds: “Dad passed away this year and during his illness the Hospice nurses came to see him. The Hospice was a charity he wanted donations to, so this is going to be a Christmas tradition for us as a family every year.”

Including the funds collated so far from this year’s event, Ely Festive 5K has now raised £86,490, helping fund Arthur Rank Hospice’s services which are delivered at the Hospice in Cambridge, the Alan Hudson Day Treatment Centre in Wisbech and in patients’ own homes via the Arthur Rank Community Team. Annually the Hospice provides vital care and support to 3600 patients across Cambridgeshire, who are living with a life-limiting illness.

Donna Talbot, Director of Fundraising and Communications at Arthur Rank Hospice, adds: “We are thrilled the Ely Festive 5k Fun Run continues to go from strength to strength. With the number of places for participants increased this year, it was wonderful the event sell-out, with 800 people donning Santa hats to run through the streets of the City.

“The Hospice delivers Hospice at Home to many people in Ely and the surrounding area and this is just one of the important services, that this fun run helps to fund. We would like to sincerely thank all of those involved and hope everyone enjoyed Santa’s early arrival in the City.”

Philippa Hazel and Caroline Simons, completed the fun run just six months after having babies and said: “It was tough, but we really enjoyed it and we’re now feeling very proud that we managed to get around. The sun was shining as we went down the hill past the Cathedral and it was just amazing to see how much effort everyone had put in. There were quite a few people running in memory of someone, where they had a poster on their back saying who they were running for. We choked up a bit about that, but it was really beautiful. It is just a lovely, wonderful event to be involved in.”

The Hospice would like to extend its grateful thanks to Ely Cathedral for generously allowing the event to take place in their grounds with such a spectacular backdrop, as well as the residents of Ely City for their patience with accommodating the morning road closures. Headline sponsors Ward Gethin Archer and Price Bailey were on hand to show their support and many of their staff also chose to take part in the run. Busy Bee Recruitment – who funded 50 children’s places – provided special certificates for children and the East of England Co-op Funeral Services  provided water, mulled wine and particularly delicious mince pies. Michelle and Angela from Feel Good Fitness  were on-hand for the warm-up and Mayor of Ely Cllr Mike Rouse sounded the klaxon at the start and presented the run’s winners with their trophies and prizes. Royal Marquees  kindly donated the use of a large marquee, Cross Country Carriers provided the staging, Hawthorn loaned their PA equipment and Gourmet Brownie  & Rural Coffee Project  who provided luxury refreshments at the finish line both gave a donation. A special thank you is extended to all those who kindly gave up their time to marshal and volunteer on the day!

The Charity is encouraging event participants to send in their final donations and any sponsorship raised by Friday 11 January 2019, hoping that the grand total raised since the event since it started in 2010 may reach in the region of £90,000!

Donations can be dropped into the Hospice itself at its Shelford Bottom home, be made over the phone by calling 01223 675888 or by making an online donation here

Arthur Rank Hospice Charity (Registered Charity No 1133354) supports people in Cambridgeshire living with a life-limiting illness and those who need end-of-life care. Services are provided free of charge to patients and their families; the aim is to provide the highest quality care, helping them to make every moment count.

The Hospice cares for and supports more than 3600 patients each year across the Hospice in Cambridge, the Alan Hudson Day Treatment Centre in Wisbech and in patients’ own homes via the Arthur Rank Community Team. The care and support provided by the Inpatient Unit, Day Therapy and Hospice at Home teams is practical, holistic and tailored to the individual. Programmes may include psychological support, physiotherapy, complementary therapy, occupational therapy, rehabilitative support, counselling, bereavement and spiritual support. Outpatient services such as medical and pain clinics, as well as our lymphoedema service, are based in the Bradbury Wellness Centre at the Hospice.

As a charity, the Hospice needs to secure £8.1 million every year to deliver its services free of charge to patients and their loved ones. About half of this currently comes from commissioned income; therefore, the Charity remains hugely grateful to the local community, which contributes the remainder and whose support is critical in helping make every moment count.
The Hospice is always looking for new ways to raise funds so that it can continue to provide and develop its vital services long into the future. For further information, please visit arhc.org.uk